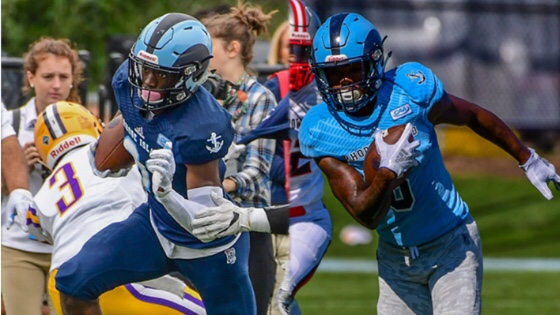 URI receivers and cousins Isaiah Coulter and Aaron Parker are two intriguing prospects in this draft.

2. John Phillips, OG, Boston College, 6-6 305: Phillips is a physical run blocker who resets the line of scrimmage and controls defenders on single blocks. He struggles at times with three technique tackles in pass pro but is fundamentally sound in his set up and can punch, recoil and not lose ground. He could be a late day three pick.

3. Isaiah Coulter, WR, URI, 6-1 198: Coulter was a productive receiver at URI along with his cousin Aaron Parker. The two posted big numbers in a pass first offense. Coulter has terrific size and ball skills. He is a good route runner who has shown he can separate after the catch. Coulter has the upside to develop into a starting receiver in the NFL.

4. Isaiah Rodgers, CB, UMass, 5-10 170: Rodgers is one of the most dynamic defensive players in the area. He had 11 career interceptions at UMass including one he returned for a touchdown. Rodgers is also a terrific kick returner. He projects as a slot nickel or slot dime corner and a special teamer.

5. Aaron Parker, WR, URI, 6-1 209: Parker is a terrific route runner who can separate at the line of scrimmage and has terrific hands. The potential is there for Parker to develop into a second or third receiver.

6. Kyle Murphy, OG, URI, 6-3 316: Versatile offensive lineman who has played every position along the offensive line during his time at URI. Projects as a guard in the NFL.

7. Earnest Edwards, WR, Maine, 5-10 175: Edwards is an explosive slot receiver who can separate vertically and make big plays in the passing game. He will garner interest either in the draft or as a UDFA because of his return skills. Could be the Deontae Harris of this draft.

8. Isiah Swann, CB Dartmouth, 5-11 188: The reigning Ivy League defensive player of the year has the size and the physical tools to play in a man to man cover scheme or as a squat Cover 2 corner.

9. Jared Gerbino, QB, Dartmouth, 6-4 230: Gerbino is a dual threat quarterback with who is a good athlete with plus arm strength. He rushed for 1,496 yards in his career.

10. Michael Hoecht, DT, Brown, 6-4 295: Hoecht became an internet sensation recently when he ran a 4.65 forty and 4.68 forty in a virtual combine. Those are very impressive times for defensive tackle and they make Hoecht an intriguing late round option.

10. Isiah Perkins, CB, 6-0 191, New Hampshire: Perkins has good size and is long. He is most effective as a squat Cover 2 corner who can jam, re-route receivers and play the run.

12. Chris Agyemang, DE, 6-4 270, Sacred Heart: Agyemang is an intriguing prospect. He is explosive off the snap, naturally bends and can play along the line of scrimmage. He had 5.5 sacks last season.

13. Dominic Cozier, RB, 5-9 181, Holy Cross: The diminutive back rushed for 1,147 yards and 7 touchdowns last season. A scatback, Cozier has some shake in space and has a second gear that allows him to separate in the open field.