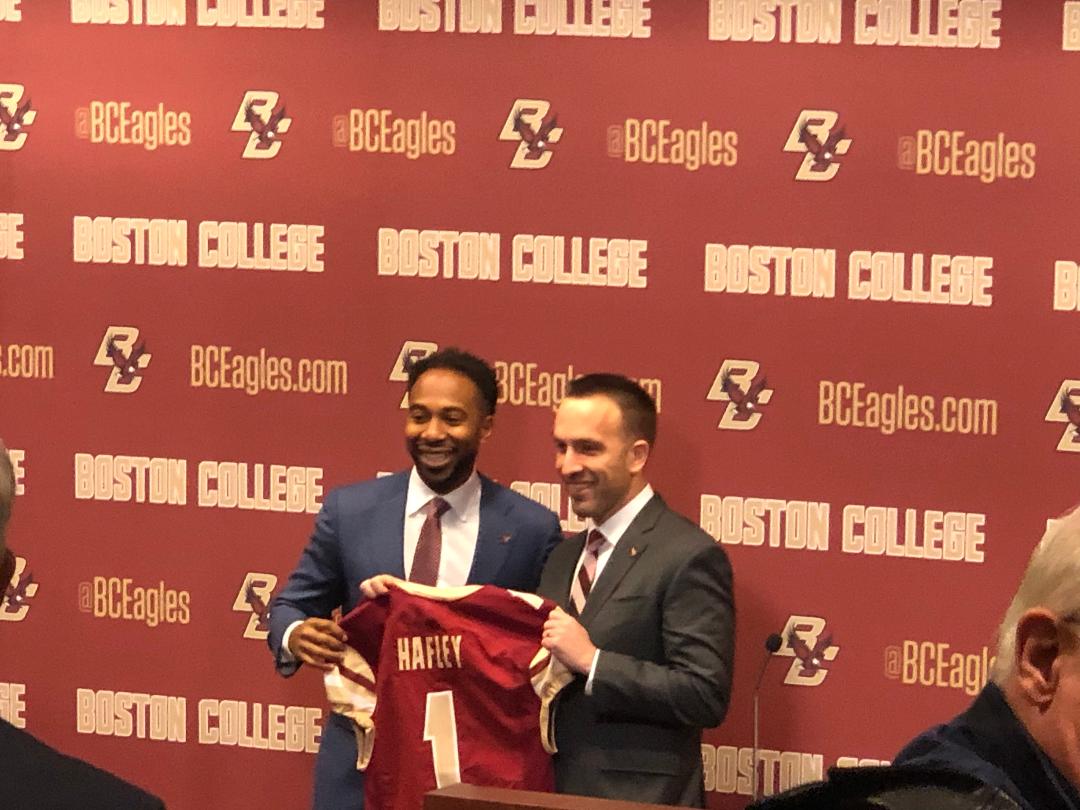 CHESTNUT HILL – It’s going to be quite a while until we know just how good of a hire Jeff Hafley was – as he’s technically coaching in the NCAA playoffs in two weeks with Ohio State and won’t truly be able to get going at BC for a bit longer than he’d like – but if Monday morning’s introductory press conference is any indication, the Eagles are surely headed to new ‘Heights’.

Hafley let his leadership qualities and genuine appreciation for the opportunity shine through in an emotional, intense 23 minutes.

Hafley is officially introduced as the new @BCFootball head coach & begins his speech with some thank you’s and a promise @MassVarsity @newftbj pic.twitter.com/qI2n9r1ki0

Hafley thanked a number of coaches early on, and as the list of big names grew one couldn’t help but think how impressive Hafley’s resume was thus far, something a young football team will undoubtedly have to respect

“It’s quite ironic, the first game I ever coached in my college career was in Boston,” Hafley said. “It was MIT versus WPI, where I was a football coach. So I’m a long way from there, but I’ve got to thank Ed Zaloom, who recruited me and was the head coach at that time, for giving me the opportunity to start my coaching career.

After that, I went to the University of Albany in New York with Bob Ford, maybe one of the most underrated coaches in the entire coaching industry. One of the best men and one of the best people and someone I am truly grateful for him entering my life.

After that, I went to Pittsburgh, Paul Rhodes and Dave Wannstedt gave me the opportunity to coach at Pittsburgh. Dave Wannstedt hired me at 26 years old to be the DB coach. I’m forever grateful. He’s been like a second father to me, and he’s taught me so much about myself as a person and as a football coach. Gave a 26-year-old a chance, and like I said, I’m forever grateful.

After that, I got a chance to coach with Greg Schiano at Rutgers. Greg treated my family extremely well, and he even gave me the opportunity to join him in the NFL, where I went to Tampa following that.”

With a national championship in his sights, Hafley made sure to acknowledge the Buckeyes as well.

“Then the last coach I do want to thank is Ryan Day,” he said. “I got to thank Ryan Day and Gene Smith and the whole Ohio State University for giving me the opportunity to be a defensive coordinator at a great place. I know Ryan loves this place. He talks really highly about it, and I get it now. I never thought that I would leave Ryan after one season. Quite honestly, that’s not what I planned on doing, but when this one opened, it felt special, and it felt right, and that’s why I’m here. Ryan Day is an unbelievable person, an unbelievable coach, and I’m very grateful for that opportunity.”

Hafley then began thanking his family, getting quite emotional, but he would soon get an unexpected reprieve while pausing to collect himself.

In the standing room only, yet silent Yawkey Athletic Center, an Iphone Siri feature could be heard as clear as day:

“I’m sorry…I could not find that…”

The room howled and Hafley seemed genuinely appreciative of the odd moment.

“I appreciate that because whoever’s phone that is, you’re not going to get that again,” he said with a laugh. “Thank you. I needed that right now. That’s a moment right there. So thank you. No doubt. So now that I actually feel better, to Gina and my kids — and there’s one person that can’t be here, my father, who passed away — I love you, and you’re why I’m here.”

While it’s not nearly the same as making coaching decisions on the fly down late in the fourth quarter, Hafley’s ability to make the moment one that will now be unforgettable for he and his family was a quick early look at his ability to not get rattled and embrace what’s in front of him.

Hafley also acknowledged that his tenure at BC can’t start just yet for some pretty decent reasons you could say.

Hafley met with the team earlier in the day as well and told them what his expectations were and why he wanted to take over the reigns at Boston College.

As someone who has coached in the NFL and is now helping Ohio State pursue a national championship, Hafley also knows that it’s not going to be just the players on the field that help bring BC back to its glory days however.

“But what I’d ask all of you, we need to lock arms,” he said. “I’d ask you guys in this room, everybody. I’d ask the alumni. I’d ask the faculty, the students. I’d ask everybody in the whole BC community. We have to lock arms, and we have to do it together, and that’s my job to make sure we all feel that way because it’s going to be hard. We’re going to work, but it’s going to be real, and you’re going to hear me say that a lot.”

The most impressive thing during Hafley’s introduction on Monday was his humbleness. Again, with a resume like his it’d be easy to come into a mediocre program and immediately act like you’ve got all the answers, but that simply isn’t the case, and Hafley explained why.

“I mean, just look at me. I’m not the biggest guy. I don’t look like I played big time football, and that’s the truth. I’ve had to work really hard. I’ve had a chip on my shoulder. I’ve had to kick down doors. It’s been hard, but it’s been real, and it’s been worth it, and I’ve had the support. I told Martin this, I have a list in my wallet of all the things that doubters have said to me my whole life.”

Monday was simply the first day of the Jeff Hafley era, and there is always the chance that it goes about as well as it did for former coach Steve Addazio, but it’s hard not to be excited about Hafley’s command of a room, his demeanor, his resume, and his true appreciation for the opportunity he’s been given.