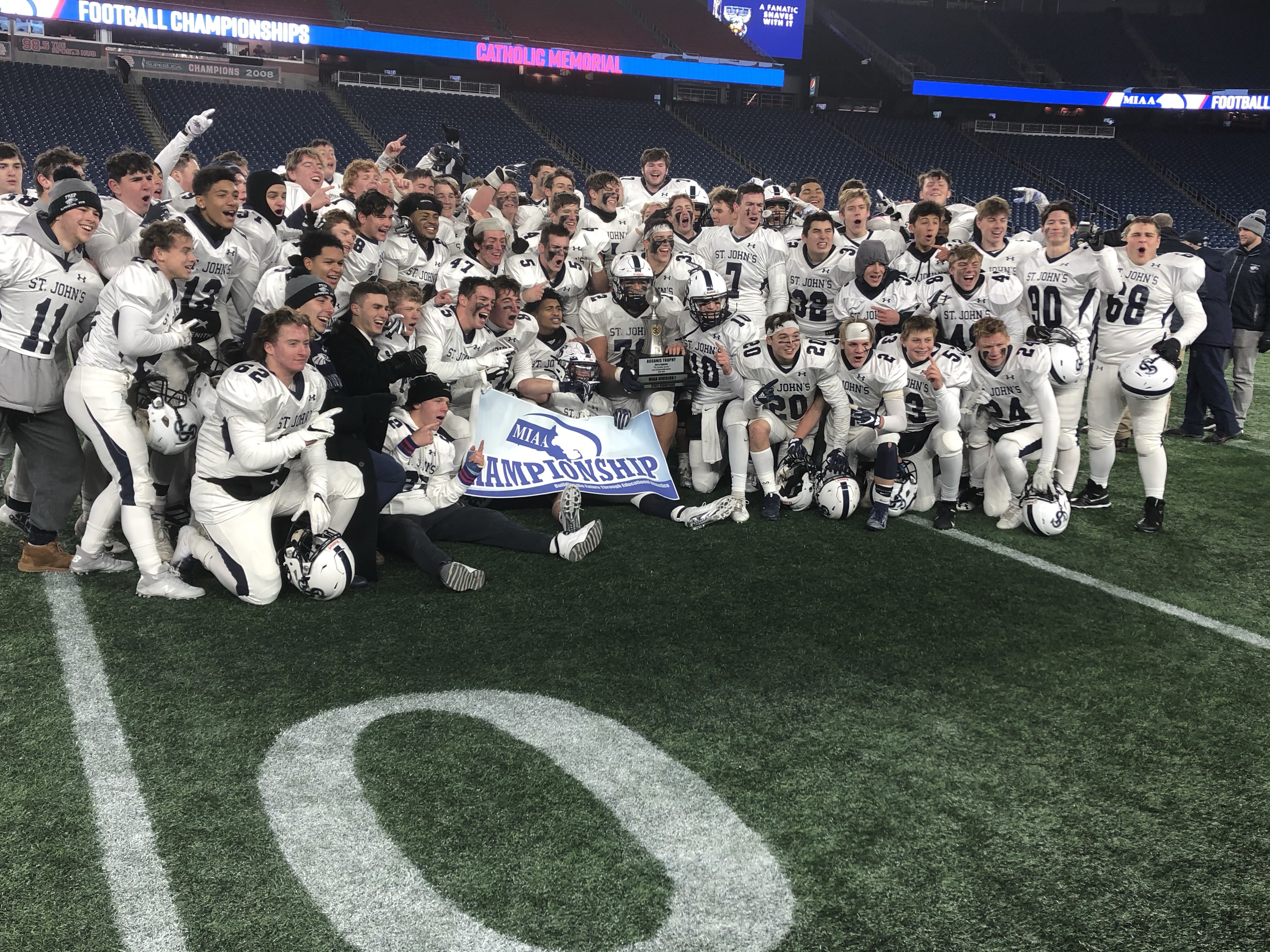 St. John’s Prep is number one in our final poll of the season.

The 2019 season is officially over so here is our final top 25 poll of the season.

1. St. John’s Prep (11-1): Eagles finish number one in the state after beating CM and winning back to back state championships.

3. Springfield Central (9-2): Central rolled over Duxbury to go back to back in Division 3. The Golden Eagles will be favored once again next season.

4. Catholic Memorial (11-1): A bitter loss to St. John’s was the only blemish in what was a great season.

5. Melrose (12-0): The Red Raiders capped off a dominate run in Division 4 with a hard fought win over Plymouth South. That is two titles in three years for Tim Morris.

6. Central Catholic (9-2): The Red Raiders only two losses were to St. John’s Prep. Chuck Adamopoulos has a talented group back next season.

7. Natick (10-1): Natick lost a tough game to Mansfield in the D2 South Sectional final but returns quarterback Will Lederman and running back Jaylyn Aponte next season.

8. Everett (8-3): The Tide had an up and down season but return a talented team next season. Everett will once again be in the mix in D1 North.

10. Swampscott (10-2) Big Blue brings home their first state title since 2007 with a dominant win over Amherst-Pelham.

11. Duxbury (9-4): After starting 0-2, the Dragons turned things around when Will Prouty took over at quarterback. Duxbury finished with a tough loss to Springfield Central but it was still a great season for them.

12. Canton (10-1): The Bulldogs saw their magical season end at the hands of Holliston but it was still a special run.

13. Revere (10-1): Joe Llanos and company brought Revere to heights that have not been seen in a long time. The future is bright for this program.

14. Tewksbury (10-2): Tewksbury once again put together a solid campaign but lost to Duxbury in the sectional final.

15. Wellesley (9-2): Wellesley‘s only two losses were to Natick this season. An impressive season for the Raiders.

17. King Philip (8-3): It was a disappointing season by KP standards but the Warriors have a lot of returning talent.

18. Abington: The Green Wave rode running back Will Klein all the way to a D7 state title.

20. Plymouth South (10-3): The Panthers surprised folks coming out of D4 South. Head coach Scott Frye has some talent back next season most notably quarterback Hunter Dean.

21. Holliston (10-2): The Panthers lost to Swampscott in the D5 sectional final but return a solid core next season.

22. St. John’s Shrewsbury (8-3): The Pioneers had a tough schedule but managed to stay competitive despite that.

23. Doherty (8-3): The Highlanders got off to a fast start but losses to Wachusett, St. John’s and Shrewsbury slowed down what was an otherwise solid season.

24. Stoughton (8-3): The Black Knights have a lot of talent back next season, most notably the Ais brothers.

25. St. Bernard’s (9-4): The Bernardians went back to back after beating West Bridgewater in the D8 Super Bowl.