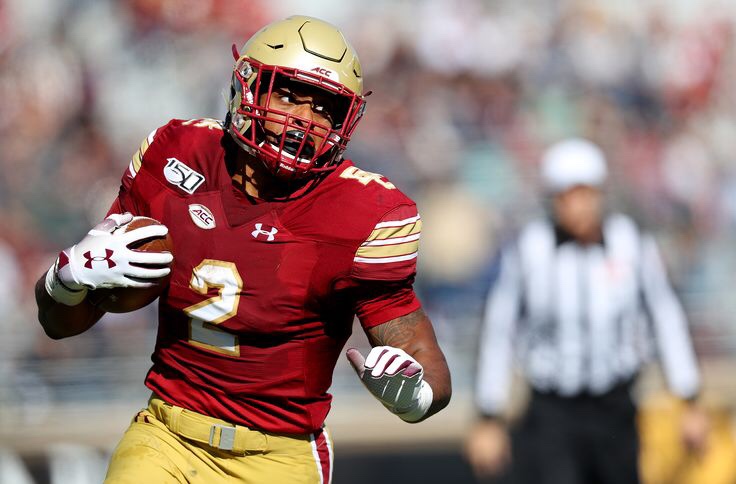 Boston College all time leading rusher, A.J Dillon has decided to enter the NFL Draft. Dillon made the announcement after three stellar seasons at the Heights. He finished his career with 4,382 yards and 38 touchdowns. He carried the ball an astonishing 845 times.

Dillon will forgo the Birmingham Bowl to prepare for the NFL Combine and the draft process. At 6–0 and 249 pounds, Dillon is a punishing down hill runner who hits the hole quick and can accelerate into the second level. While he lacks that elite “second gear” he does make big chunk plays.

Dillon projects as a starting running back at the next level but he will more than likely end up in a time share situation. Given the amount of carries that Dillon at Boston College, he might be more of a change of pace back as a rookie.

As it currently stands, Dillon projects as a day two or early day three pick. That means he could go anymore between the third and fifth round. He could go higher but he is going to have to have a great combine and pro day in order for that to happen.

A.J Dillon was a special player. He came into Boston College with high expectations and met them. He set the bar high as a freshmen and accomplished what he set out to do.

Dillon embodied all that Boston College stands for and was a shining example for the school. He was the epitome of a student athlete. That is way he will be missed on and off the field.