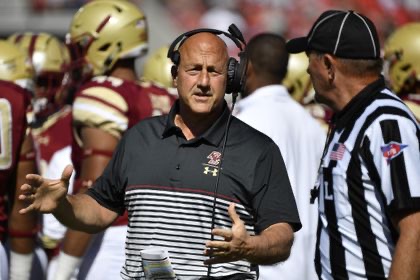 1. Boston College looked like an FCS team Saturday night against Clemson. I want to believe that the 59-7 score was not indicative of the talent difference between these two programs right now but I am afraid it is. B.C doesn’t have the athletes to match up with Clemson.

2. The Globe’s Julian Benbow wrote a story on Sunday that Rutgers might be interested in hiring Eagles coach Steve Addazio. It makes sense if you think about it. Addazio is a program builder and he has strong recruiting ties in New Jersey. He would be a great hire for Rutgers. The question is, does he leave Chestnut Hill? Well, it might not be his choice come season’s end.

3. Harvard proved on Saturday that they have a lot of good young talent but they are not at the level of Princeton right now and I don’t think they are as good as Dartmouth either.

4. Lowly UConn hung 56 on UMass‘ defense on Saturday. We say it every week it seems but the Minutemen have a long way to go. Despite that, the UMass, UConn football series needs to continue. It is great for college football in the area.

5. How hard must it have been for the UMass staff to watch a local product like Kevin Mensah rush for five touchdowns. To think that the Shepherd Hill product was in their back yard and the previous staff didn’t get him.

6. Bob Chesney and his staff continue to do a great job at Holy Cross. The Crusaders have been competitive this season aside from one game. Chesney is recruiting quality talent and his experienced staff is making the most of it.

7. You can say the same thing about Dan Curran at Merrimack. The Warriors have had their ups and downs at times this season but with back to back wins over Delaware State and a Presbyterian, the Warriors are 4-4 and have a good shot at finishing with a winning record. They travel to URI this weekend and finish out the season with two winnable games against Franklin Pierce and Long Island. Merrimack is a program on the rise and a winning season would validate that.

8. How about the performance of Brown quarterback E.J Perry versus Cornell last weekend. Perry was a one man offensive machine throwing for 372 yards and three touchdown passes. Perry also rushed for 91 yards on 21 carries. Brown lost the game but I’d coach James Perry can upgrade the talent in recruiting, Brown could be much improved next season.

9. Maine beat William & Mary 35-24 in a game that was a back and forth affair that required the Black Bear defense to get some key stops down the stretch. At 3-5, Maine has been a disappointment but they have played some exciting football.

10. Dartmouth crushed Columbia Friday night 59-24. The Big Green however gave a stiff test this week when they travel to Cambridge to battle Harvard.