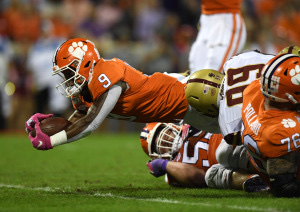 Game Rewind: The Eagles were overwhelmed by the Tigers in a game that was over in the first quarter. B.C didn’t look like belonged on the same field with Clemson and quite frankly looked unprepared for the game and the environment.

1. Clemson fast start buries Eagles: Clemson set a blistering pace early and the Eagles just couldn’t keep up. Boston College didn’t have the athletes to play with Clemson as the Tigers scored on all six first half possession en route to a blow out win.

2. Grosel struggles badly: Quarterback Dennis Grosel struggles badly in this loss completing only 3 of 14 passes for 53 yards. In his defense, Grosel didn’t have a lot of time to throw the ball as the offensive line struggled in pass protection. It was a tough night all around, especially for Grosel.

3. Eagles defense gets shredded: Clemson had a season high 674 yards of total offense and did whatever they wanted in this game offensively. Boston College just didn’t match up. The one thing the Eagles had to do was tackle in space. They could not and the Tigers took advantage by making big plays.

4. Dillon breaks school rushing record: A.J Dillon surpassed Andre Williams as the school’s all time leading rusher. Dillon carried the ball 19 times for 76 yards and a touchdown. It was the only bright spot for the Eagles in an otherwise forgettable night.

5. Eagles weren’t ready to play: The Eagles did not look ready to play. Sure, they were overmatched from a talent standpoint but the team looked overwhelmed and not ready for a big stage like this. It was obvious from the opening possession on offense and defense. Ultimately, this falls on the coach. Steve Addazio and his staff need to do a better job of preparing for games like this.