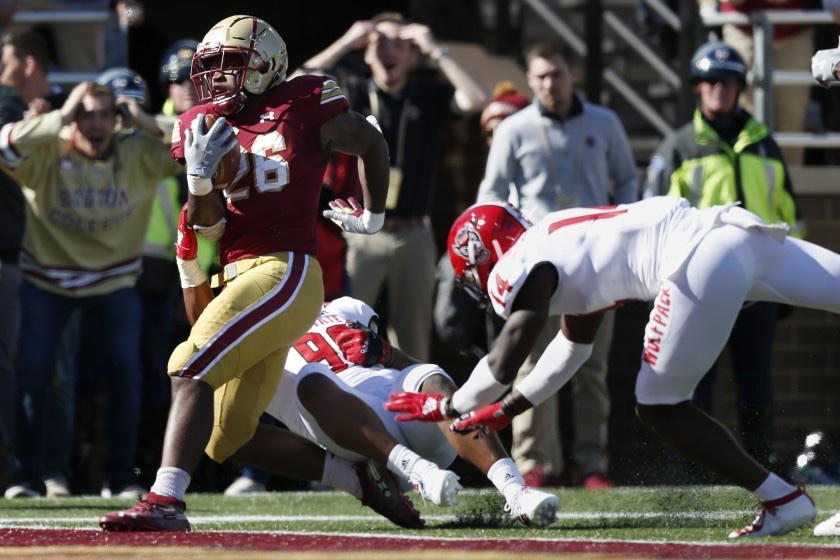 Game Rewind: Boston College physically dominated N.C State on both sides of the ball in a dominate 45-24 win at the Heights.

1. Eagles physically dominate the Wolfpack: The Eagles flat out dominated N.C State on both sides of the ball. They ran the football down the Wolfpack’s throat and controlled the line of scrimmage offensively.

Defensively, Boston College got consistent pressure on N.C State’s quarterbacks. They also did a great job of gap controlling the line of scrimmage and limiting the Wolfpack to 56 yards rushing.

2. Dillon and Bailey lead a punishing ground game: Boston College ran the ball 60 times for 429 yards and five touchdowns. A.J Dillon lead the way with 34 carries for 223 yards and three touchdowns. Dillon is now 75 yards away from becoming the all time leading rusher in school history.

Despite being on the brink of history, Dillon is a team first guy and Steve Addazio echoed that sentiment. “I’m sure you’ll talk to A.J. I’m sure what he’s going to tell you is what matters is his team, his teammates, and being able to do what he has to do to help our team win.”

Dillon wasn’t the only back who had a big day. Running mate David Bailey carried the ball 16 times for 183 yards and two touchdowns. Bailey averaged 11.3 yards per carry. Bailey credits Dillon with helping develop at Boston College. “He took me under his wing, he’s like a big brother to me. He taught me the concepts of all the plays and pass protection”

Addazio leaned on both backs. He stated afterwards that it was a part of the plan to run the football a lot this week but that the game also dictated that the Eagles stay with it. They did and in the process physically wore down the ACC’s number one run defense.

3. Grosel manages the game: Back up quarterback Dennis Grosel did a great job of managing the game. He only attempted 15 passes but completed six of them for 105 yards. Grosel really impressed his coach. Addazio commented on Grosel’s leadership and toughness. “Dennis has really good toughness. He had total poise and composure out there and he was in charge of that offensive unit.”

While Grosel didn’t throw the ball a lot, he did make a couple of key plays as a runner that extended drives. Grosel’s most important run of the day was a key third down run that extended a 98 yard drive in the third quarter.

It was hard not to be impressed with Grosel. He did a great job of managing the offense and taking care of the football.

4. Defense plays their best game of the season: The Eagles defense has been much maligned this season. They have struggled to stop the run and get off the field on third down. I don’t know what defensive coordinator Bill Sheridan and the defensive staff did during the bye week but whatever it was, it worked.

The Eagles clearly focused on fundamentals. They took better pursuit angles, finished tackles and communicated more in the secondary. It was a noticeable improvement for a unit that has struggled this season.

5. Bye week pays dividends: Sometimes a team that is struggling needs a week off to clear their heads, go back to the drawing board and re-focus on the fundamentals.

That is exactly what the Eagles did according to Addazio. “We wanted to go back and work on our fundamentals. We wanted to look at some players, some younger players. We wanted to take a look at our scheme, how we can streamline it, make it simpler, how we can become more efficient.” The bye week clearly helped the Eagles refocus on both sides of the ball and it showed on Saturday.