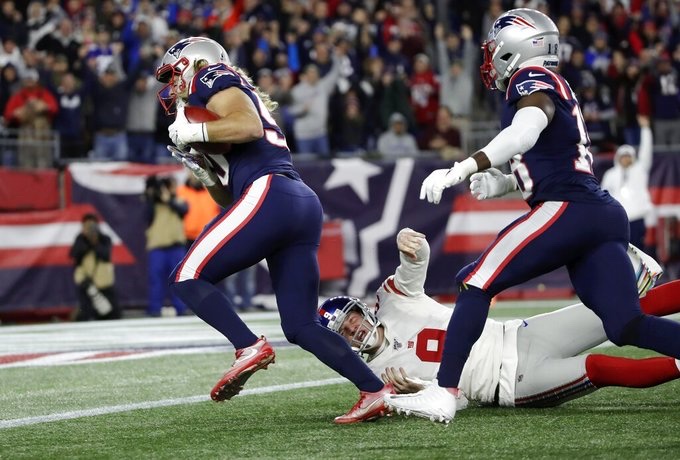 Game Rewind: The Patriots overcame a slow start offensively and leaned on their defense to beat the New York Giants 35-14 in what was an ugly game.

Here are five thoughts on the win.

1. Brady struggles early: Tom Brady has gotten off to slow starts in games this season and this game was no exception. Brady threw an early interception and he also fumbled the all. He eventually settled in but his early game struggles are concerning.

2. Josh Gordon hurts knee: Gordon hurt his knee making a tackle on a fumble and recovery by the defense. He didn’t return to the game and his status for this week is up in the air. The Patriots can Ill-afford to lose Gordon. He is the only receiver they have right now with size that can make plays outside the hashes.

3. First half struggles continue on offense: I don’t know if it is because this skill group is not very good or what but the Patriots offensive struggles in the first half continued in this game. It is not a good trend and they need to get off to better starts offensively otherwise it will catch up with them eventually.

4. Defense gives up a big play: The defense has been historically good thus far to start the season but they finally gave up a big play defensively on Golden Tate’s 64 yard touchdown catch. Despite that, Bill Belichick and the defensive coaches made the necessary adjustments and the defense dominated the second half. Collectively, the defense forced four turnovers.

5. Injuries pile up: Josh Gordon, tight end Matt LaCosse and safety Patrick Chung all left this game with injuries. The injury bug continues to bite this team and they are struggling to find suitable bodies, especially at tight end. Bill Belichick and his staff have cobbled it together but for how much longer?