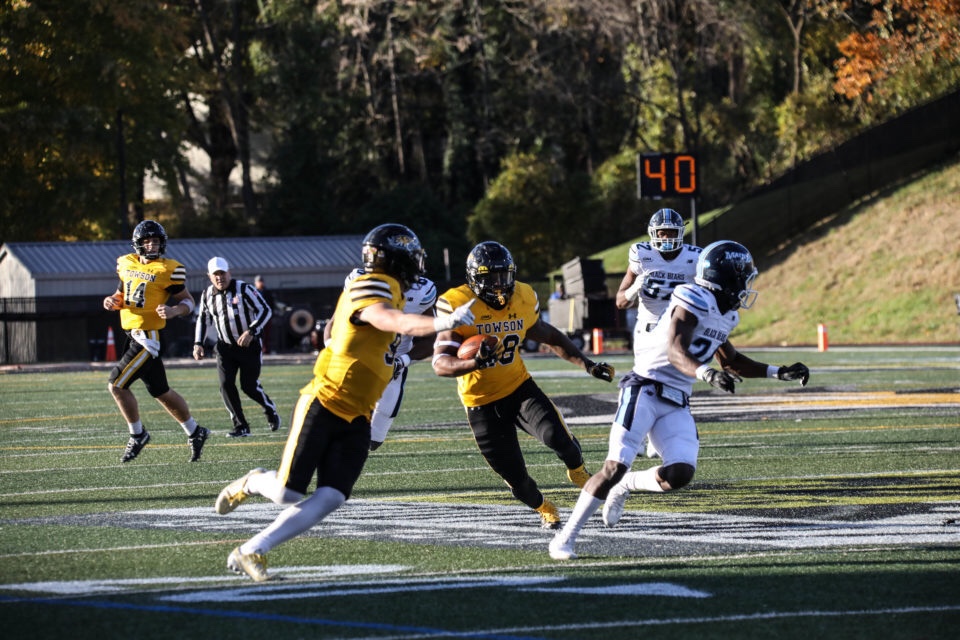 Maine and Towson have played some great games in recent years and today should be no different.

Five local programs are in action this week. Here is a preview of the five games.

#B Towson Tigers (2-0) at #7 Maine Black Bears (1-1): A huge early season match up in the CAA as the two favorites in the conference square off in Orono. Maine best Towson 35-28 last season.

The Black Bears are coming off of a tough 26-18 loss at Georgia Southern last week. They played well but couldn’t get key stops down the stretch.

Maine’s defense will have its hands full with a Towson running back Shane Simpson. The two time All-American is one of the best dual threat backs in all of college football. Stopping Simpson and quarterback Tom Flacco will be a tough task. Flacco has completed passes to 12 different receivers already this season.

This will be the first meeting in Orono between two top ten teams in the 127 year history of the Maine Football program.

UNH Wildcats (0-1) at FIU Panthers (0-1): After a gut wrenching loss to Holy Cross last week, interim head coach Ricky Santos and the Wildcats head down to University Park, Florida to battle the Panthers. New Hampshire needs to get their offense on track particularly their quarterback situation. They did not play well. Both Bret Edwards and Matt Brosmer played and struggled. Each threw an interception.

Santos and the offensive coaching staff will have to find a way to get their quarterbacks going and get more out of them. It won’t be easy against a fast and athletic FIU defense. Getting Carlos Washington and the running game going early will be key for the Wildcats. They must control the pace if they want to have any shot of winning this game. I expected the UNH defense to once again play well. The offense has to do more.

Fordham Rams (0-2) at Bryant Bulldogs (0-2): The Chris Merritt era has gotten off to a slow start. The Bulldogs are 0-2 and are averaging just 6.5 points per game. The defense has been even worse giving up 40 points per game in the first two weeks. Luckily for Bryant, Fordham has also struggled on both sides of the ball. This is a good opportunity for the Bulldogs to get their first win and build some confidence. Quarterback Chris Hindle needs to get into rhythm early and find senior wide receiver Vincent Nisivoccia. If he does, this offense can finally get on track.

Merrimack has played well offensively but defense has been a bit of an issue. This game presents an opportunity for the defense to improve. St. Francis has struggled offensively having scored only 20 points in two games thus far this season. Merrimack conversely has averaged 41 points per game. On paper, it is a winnable game for the Warriors. They should take care of business.