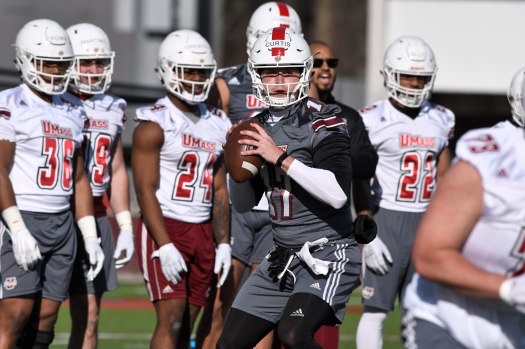 Kick-off: UMass hired 35 year old Walt Bell to reinvigorate a program that was struggling. Bell hired a young, motivated staff that can teach his philosophy but also relate to the players. Bell and his staff have a lot of work to do. The Minutemen are young. It will be a challenge but Bell and his staff will try to lay the foundation for future success this season.

Offense: Bell will utilize a spread offensive attack which feature 11 and 12 personnel groupings. The Minutemen want to play fast but also want to be multiple. The quarterback position needs to be settled. Seniors Michael Curtis and Randall West have battled it against JC transfer Andrew Brito. Brito is more of a fit in Bell’s offense but Curtis and West have more experience and could be better options to start the season.

Who ever the quarterback is, they will look to wide receiver Sadiq Palmer. At 6-1 175, Palmer is a terrific route runner who can create separation and make plays after the catch. Palmer will be expected to fill the void after the departure of Andy Isabella. Redshirt sophomore Zak Simon and freshmen Jermaine Johnson also figure to see a lot of targets.

Running back is a sore spot for the Minutemen. Replacing Last season’s starter Marquis Young will be difficult because there isn’t a lot of talent or depth at the position. Redshirt junior Bilal Ally is the starter but there isn’t much behind him. Transfer Cam Roberson will also get some touches in different ways. Redshirt senior tight end Kyle Horn is a big target that can line up in line and as a split end.

The offensive line is young and raw. There will be some growing pains with this group. Guard Ray Thomas Ishman will anchor this unit that must develop quickly if the Minutemen are to be competitive.

Defense: The UMass defense was among the worst in the nation last season giving up 489 yards and 43 points per game. That is awful. New defensive coordinator Aazaar Abdul-Rahim is charged with turning this defense around but it won’t be easy. The Minutemen lack talent so the turnaround will be slow.

Junior defensive tackle Jake Byczko to lead an experienced group of tackles. The same however can not be said for the defensive end and linebackers.

Junior Chinedu Ogbonna, the Minutemen’s leading returning tackler will start at MIKE linebacker. He will be joined by grad transfer Jarvis Miller and redshirt sophomore Claudin Cherelus as the team’s base linebacking corp. This group has the potential to be very good.

The secondary will also be young with three starters graduating. The return of Isaiah Rodgers however should help ease the blow. JUCO transfer Logan Darby is a player to keep an eye at free safety. He is rangy and has terrific ball skills.

Final thoughts: The Minutemen are young but talented. Bell and his staff have upgraded the talent and have started changing the culture. It will take time but the Minutemen will be better in 2019.