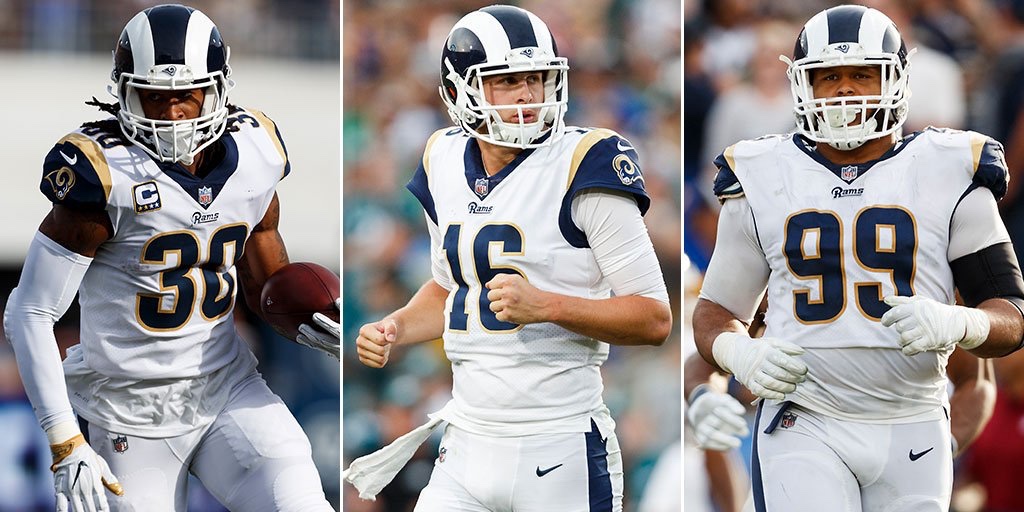 The Patriots will battle the Los Angeles Rams in Super Bowl LIII. The game features the old guard Patriots versus the up and coming Rams. A lot has been made this week about the coaching match up between Bill Belichick and Sean McVay but as always, this game will come down to the players.

Here is what you need to know about the Los Angeles Rams on offense, defense and special teams.

Offense: The Rams like to play fast and push the tempo. They primarily operate out of 11 and 12 personnel. As we have talked about all week, they like to run the football to set up their play action passing game and their naked bootlegs.

Jared Goff had a solid third season playing in Sean McVay’s offense. Goff threw for 4,688 yards and 32 touchdown passes. Goff has the perfect demeanor to play quarterback. He doesn’t get too high, he doesn’t get too low. He is calm and collected in the pocket. His mechanics are good and he can make every throw in the playbook.

Goff has a great supporting cast around him. Todd Gurley was on his way to an MVP caliber season but late season injuries slowed him down. At 6-1 224, Gurley is a big back who has good feet and displays good patience. He runs square to the line of scrimmage and displays good balance. The late season addition veteran C.J Anderson has given the Rams an effective one, two punch in the backfield.

A big key for the Rams offensive success this season has been their offensive line. Anchored by veterans Andrew Whitworth, Rodger Saffold and John Sullivan, this unit has paved the way for an offense that averaged 32.9 points per game. They are big, athletic and technically sound. The Rams offensive line is one of the most cohesive units in the league.

Cooper Kupp was one of Goff’s primary targets but since injuring his knee is week 10, Robert Woods and Brandin Cooks have had to shoulder more of the workload in the passing game. Both receivers had over 1,200 yards receiving this season and they are a tough match up one on one, especially against man coverage. The Rams will use Woods and Cooks as runners and receivers which makes them tough to defend.

Tight ends Gerald Everett and Tyler Higbee are your classic detach tight ends who can align anywhere in a formation and create match-ups. Combined, the two tight ends only had 57 catches and 5 touchdowns so needless to say, they are not featured in this offense. Despite those numbers, they could create problems for the Patriots if New England focuses on taking away Woods and Cooks only.

Defense: The Rams operate out of a hybrid 3-4 defense. Their base front is a 30 front but they kick the front over a lot which makes them a 40 front essentially. Defensive coordinator Wade Phillips will being consistent pressure but he won’t “sell out”. The Patriots will get a study diet of four, five and six man pressures depending on down and distance and situation.

In terms of coverage, the Rams will vary their coverages. They do play a fair amount of zone coverage but they will also play match up man to man and allow their talented corners, Aqib Talib and Marcus Peters to take away the other teams top receiving options.

Much of what the Rams do defensively is predicated on whether or not they can get consistent pressure on the quarterback. That is usually not a problem when you have arguably the best defensive player in the game in Aaron Donald. Phillips does a great job of moving Donald around in their fronts. Donald will line up head up on the nose, as a three technique or as a five technique. That puts a lot of pressure on opposing offensive lines because it is hard to account for Donald in blocking schemes.

The addition of Ndamukong Suh to go along with Donald and Michael Brockers gives the Rams arguably the best defensive line in football. Suh and Brockers are long and they can line up as a three technique, four technique (head up on the tackle) and five technique (outside shade of the tackle) That versatility is valuable to Phillips because he can scheme his fronts and pressures accordingly.

The Rams feature seven first round draft picks on their defense. Their back seven is just as good as their front seven. Linebackers Samson Ebukam, Cory Littleton and Mark Barron are athletic and can do multiple things both in terms of pressure and coverage. They make the Rams 3-4 defense work because of their varied skill set.

I mentioned Talib and Peters earlier. Safeties John Johnson and LaMarcus Joyner can play over the top in a Cover 2 look and play in a single high look as well. Both have been liabilities in coverage at times but Phillips does a good job of protecting them in his coverage schemes.

Special Teams: Kicker Greg Zuerlien and Punter Johnny Hekker are arguably the best kicking duo in the NFL. Both have big legs and they can flip field position at any point in a game. The Rams have plenty of speed in the return game with Jo Jo Natson and Blake Countess.