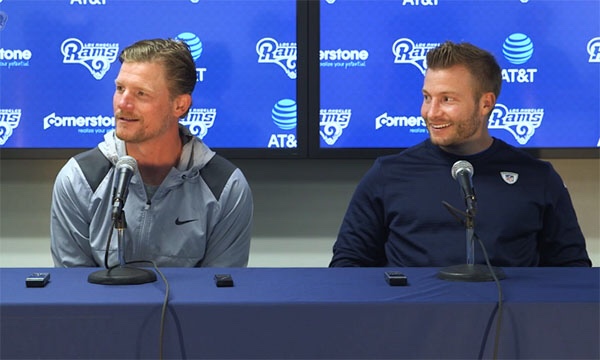 We kick off our Super Bowl coverage for this week by getting to know the Rams. Who are these guys? How have they been able to turn things around so quickly and become a title contender?

Here is a break down of some of the key members of the Rams.

GM Les Snead: Snead came to the Rams in 2012 from the Atlanta Falcons where he was Director of player personnel. Snead joined the Rams front office along with new coach Jeff Fisher. With Fisher’s guidance, Snead set out to build a roster that strong along the offensive and defensive lines. During Snead’s tenure, the Rams have drafted guard Rodger Saffold, defensive tackles Michael Brockers and Aaron Donald and signed free agents Andrew Whitworth and Ndamukong Suh. Snead also rolled the dice and drafted Todd Gurley 10th overall in 2015.

Head Coach Sean McVay: McVay comes from a football family. His grandfather John McVay was a long time NFL executive, most notably for the New York Giants and the San Francisco 49ers.

Sean grew up in Georgia and attended Brookhaven Marist. He then went on to play college football at Miami of Ohio. From there, McVay used his family name and the right connections to enter the NFL as a coach. In 2008, JonGruden hired McVay as assistant wide receivers coach for the Tampa Bay Buccaneers. After coaching with the no defunct Florida Tuskers in 2009 of the UFL, McVay was hired as assistant tight ends coach of the Washington Redskins in 2010. In 2011, he was elevated to tight ends coach and in 2014 was named offensive coordinator after Jay Gruden was named head coach.

After a three year run as offensive coordinator, McVay was hired as head coach of the Los Angeles Rams in 2017. The rest is history. Now every team is looking for the next Sean McVay. McVay is a terrific coach who learned at the feet of Mike Shanahan and Jon Gruden. While he is labeled a genius, McVay himself will tell you he is just the next West Coast offense coach to experience success in that system.

Phillips’ defenses have traditionally given Tom Brady problems throughout his career.

Quarterback Jared Goff: Goff was the number one overall pick in the NFL Draft out of Cal in 2016. After struggling his rookie season under Jeff Fisher, Goff has thrived in McVay’s offense.

Goff has plus arm strength and can make every throw in the book. He is also deceptively athletic and can extend plays in and out of the pocket. That is why the Rams run outside zone so much. Todd Gurley runs it well but they also use it to set up naked bootlegs for Goff.

Goff has endeared himself to his teammates with his work ethic and his demeanor. Veteran Rams players like Andrew Whitworth have openly said they want to win this Super Bowl for him.

Running Back Todd Gurley: Gurley was drafted 10th overall by the Rams in 2015. The North Carolina native slipped in the draft after tearing his ACL during the 2014 season. At 6-1 224, Gurley is a big back who runs with power and balance. Gurley is truly a three down back. There are questions about his health right now but he will be a factor in this game if he’s healthy.

Wide Receiver Brandin Cooks: We all know Cooks was on the other sideline with the Patriots last season. The Patriots of course traded Cooks to the Rams this off-season for a first round pick. A pick they used to draft guard Isaiah Wynn with.

Upon arriving in Los Angeles, the Rams gave Cooks a six year, $88 million dollar contract. Cooks rewarded the Rams with a terrific season catching 80 passes for 1,204 yards and 5 touchdowns. The speedster will pose problems for the Patriots vertically in the passing game. It will be interesting to see how Belichick defends him.

Defensive Tackle Aaron Donald: Aaron Donald or Khalil Mack. Flip a coin as to who is the best defensive player in the game right now. Donald is an absolute terror and a match up problem. He has been since his day at Pitt where he went from a little known defensive tackle to one of the best players in the country.

Donald is stout, explosive and quick off the ball. He beats blockers with power and speed. How the Patriots handle him will go a long way in determining the outcome of this game.

Defensive Tackle Ndamukong Suh: Suh runs hot and cold and traditionally the Patriots have fared well against him. Suh however is playing at dominant level again, similar to what we saw at Nebraska and with the Detroit Lions. He has been virtually unblockable in the playoffs and he and Donald form a ferocious tandem that plays off each other. They will give the Patriots problems.

Cornerback Aqib Talib: The former Kansas product has played for the Bucs, Patriots and Broncos. Talib won a Super Bowl with the Broncos. Despite a recent ankle injury, Talib is an elite cover corner who can match up on the other team’s best receiver. The former Patriot will be motivated to prove he can match up against any receiver on his former team.