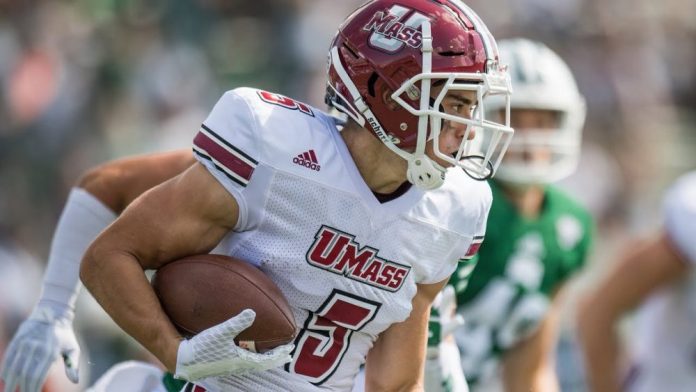 UMass receiver Andy Isabella is turning heads this week at Senior Bowl practices in Mobile, Alabama. He has displayed many of the same skills that allowed him to rack up 3,519 yards and 30 touchdowns in three seasons as a starting receiver in Amherst. Isabella also gained national attention earlier in the week by claiming that he ran a 4.26 hand timed 40-yard dash. Isabella said he hopes to run between a 4.25 and a 4.3 at the Combine.

The 5’8, 186 Isabella is terrific route runner who gains separation at the line of scrimmage by using his feet and hips. Cornerbacks have a hard time getting their hands on him because of his lateral quickness and footwork. Isabella is an instinctual route runner. He understands how to run his routes versus man and zone coverage. He has a knack for finding open windows underneath in zone and settling in them.

Isabella’s ability to separate after the catch is what makes him an elite level receiver with starter potential. He is a tough cover inside, especially on deep crossing routes and fade routes. He can get from one hash to the other relatively quickly and break away from defenders after the catch. Isabella does a terrific job of tracking the ball deep and coming down with it. He stacks cornerbacks quickly and once he comes down with it, he can separate and finish the play.

Isabella is displaying those same skills this week against some of the top draft prospects in the country. It is no surprise that his draft stock is rising. Isabella projects as an early day three prospect (rounds 3 to 4) but he could go as early as the second round if the right team falls in love with his skill set. In 2017, a little known FCS prospect named Cooper Kupp out of Eastern Washington was able to enhance his draft stock at the Senior Bowl and the Los Angeles Rams took him with the 69th pick of the third round. Zay Jones, a receiver out of East Carolina was another receiver who enhanced his draft stock in the 2017 Senior Bowl. He went to the Buffalo Bills in the second round, 37th overall. Both Kupp and Jones are 6-2 so their size and route running certain helped their draft stock but Isabella is faster and a more polished route runner. Plus he has added value as a punt returner.

The rest of the country will now find out what we have known in this region for the last three years. Andy Isabella is one heck of a football player. He has the requisite skill set to be a good receiver in the NFL. On top of that, he returns kicks as well. His size is the reason he ended up at UMass. Now he has a chance to prove those that doubted him wrong and make a name for himself on Sundays. The skill set and desire is there. Andy Isabella can make an impact at the next level.