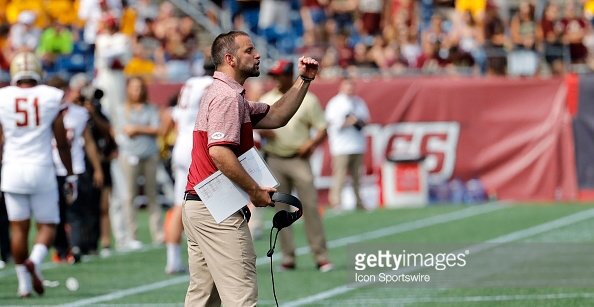 The Boston College football staff took another hit on Friday when co-defensive coordinator and defensive backs coach Anthony Campanile left for Michigan. The 36 year old Campanile arrived at the Heights from his alma mater Rutgers where he coached from 2012 to 2015.

Losing Campanile is a big blow to the Eagles because he was one of the best recruiters in the ACC. Campanile has ties high school coaching ties in New Jersey and the Mid-Atlantic. He was an assistant coach at Don Bosco High School in New Jersey from 2007 to 2011. Campanile’s Jersey ties are a big reason why Jim Harbaugh hired him. Harbaugh wants to establish more of a presence in New Jersey and with Campanile on staff, the Wolverines will.

As for the Eagles, Steve Addazio now has two major openings on his staff that he needs to fill in the coming weeks. He has yet to replace offensive coordinator Scot Loeffler who left for Bowling Green and now Campanile. Finding an experienced offensive coordinator who can get the returning offensive players to the next level is paramount.

Aside from replacing Campanile as a recruiter, Addazio must replace him as a coach first. He must find a defensive backs coach well versed in the 3-4 that can come in and coach with current defensive coordinator Jim Reid. That shouldn’t be a problem.

It is going to be a busy few weeks at Boston College between filling these vacancies and the February signing date. Everything is going to need to be settled by the start of spring ball in March. Steve Addazio will earn his money in the coming weeks.