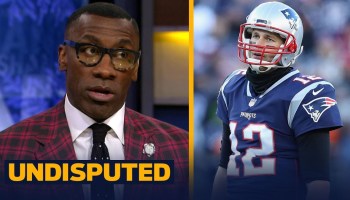 Shannon Sharpe bashed Tom Brady yesterday on his show Undisputed after Brady told Mut and Callahan of WEEI on Monday morning that he was up all night watching Chargers film. In an incoherent rant, Sharpe railed against Brady not being the only quarterback who watches film. He then launched into a career comparison of Brady and Peyton Manning and who has more touchdown passes.

Sharpe looked and sounded like a complete fool and reinforced the notion that he hates Tom Brady and the Patriots. Want proof. Go back to 1996 when Sharpe called the president asking for assistance because the Broncos were beating the Patriots.