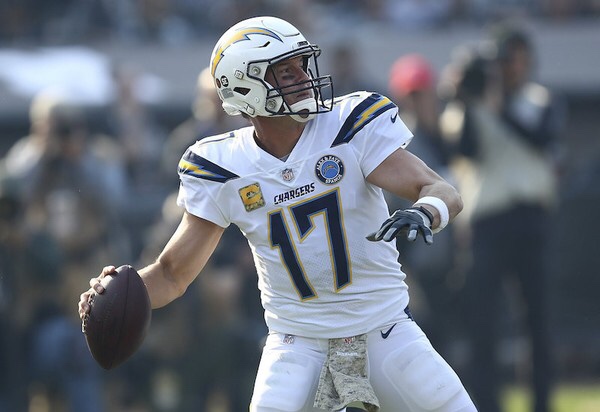 Phillip Rivers and the Chargers will pose problems for the Patriots.

The Patriots will face the Los Angeles Chargers in the AFC Divisional round on Sunday in Foxboro. Los Angeles is coming off of a 23-17 win over the Baltimore Ravens in the AFC Wild Card round. The Chargers have been good on the road this season going 8-1 away from home. They average 26.8 points per game and 372.6 yards of offense per game. Los Angeles averages 255.6 yards per game passing and 117.1 rushing. Despite being middle of the pack in both categories, the Chargers are balanced offensively. They have a deep and talented skill group that can beat teams throwing and running the football.

Defensively, Los Angeles gives up 20.6 points per game. They are ranked 9th against the pass (227 yards per game) and 9th against the run (105.8 yards per game). Defensive coordinator Gus Bradley doesn’t blitz much. Instead, he relies on his front four to get consistent pressure. The Chargers finished with 38 sacks during the regular season which is remarkable when you consider how little they bring additional pressure.

Here is my breakdown of the Chargers offense, defense and special teams.

Running Game: Los Angeles will utilize predominately zone blocking concepts. The Chargers run the football mostly out of 11 and 12 personnel. They have found success running out of spread formations. Offensive coordinator Ken Whisenhunt likes to compress formations and create confusion for the defense by motioning and bringing blockers to the motion side and away from the motion. All three of the Chargers running backs (Melvin Gordon, Austin Eckler and Justin Jackson) are one cut runners who recognize the cut and make it. Los Angeles also uses man-gap blocking schemes but they like to maintain the width of the formation even when they do that by spreading defenses out. The Chargers running game is pretty standard but effective because they are well coached up front and their backs run hard. The Chargers will also utilize some 21 personnel formations with Derek Watt as the fullback. They usually aren’t usually in 21 unless it is 1 and 10, 2nd and short or an obvious short yardage situation.

Passing Game: The Chargers will primarily operate out of 11 personnel when they want to throw the ball. Whisenhunt does a great job of moving his personnel around in formations and creating match ups for Keenan Allen, Mike Williams, Antonio Gate and Tyrell Williams. The Chargers attack the middle of the field a lot with layered concepts. They will use post routes and dig routes to open up underneath crossing routes. Allen, Gates and Tyrell Williams are the primary targets inside the hashes while Mike Williams is the primary target outside the hashes. The Chargers do a great job of isolating Williams on fades, back shoulder fades and comebacks. Given his size, Williams is tough to defend one on one. Los Angeles utilizes a lot of empty formations and they are unpredictable when they do. They will come out in empty on any given down and throw the ball. It makes it hard for the defense to figure when that will happen because the Chargers don’t substitute much when they throw.

Fronts: The Chargers are primarily a 4-3 base but like every other defense in the NFL, they are in nickel, dime or a quarter package 75% of the time. Defensive coordinator Gus Bradley is a Pete Carroll disciple so it is all about base pressure, rotating defensive lineman and playing coverage. The Chargers will use a variety of fronts and alignments to generate pressure. Bradley likes to kick Joey Bosa inside to defensive tackle on 2nd and long and 3rd and long situations. Bosa and Melvin Ingram form one of the most combination of pass rushers in the NFL.

Coverages: The Chargers will disguise a lot in the secondary. They will show a Cover 2 or quarters look and rotate on the snap. Like the Legion of Boom Seahawks, the Chargers play a lot of single high safety coverages. Tom Brady can expect to see a fair amount of Cover 1 (Man Free) and Cover 3.

Special Teams: Kicker Michael Badgley has been a revelation for the Chargers after they signed him mid-season. Badgley has connected on 15 of 16 field goals with a long of 59 yards. The University of Miami (Fla) product has been clutch for Los Angeles down the stretch.

Kick Returners: The Chargers had the number one ranked return units in the NFL during the regular season. The team that finished season behind them. The Patriots. Both teams will use their return game to tilt field position in game where getting good field position will be key.