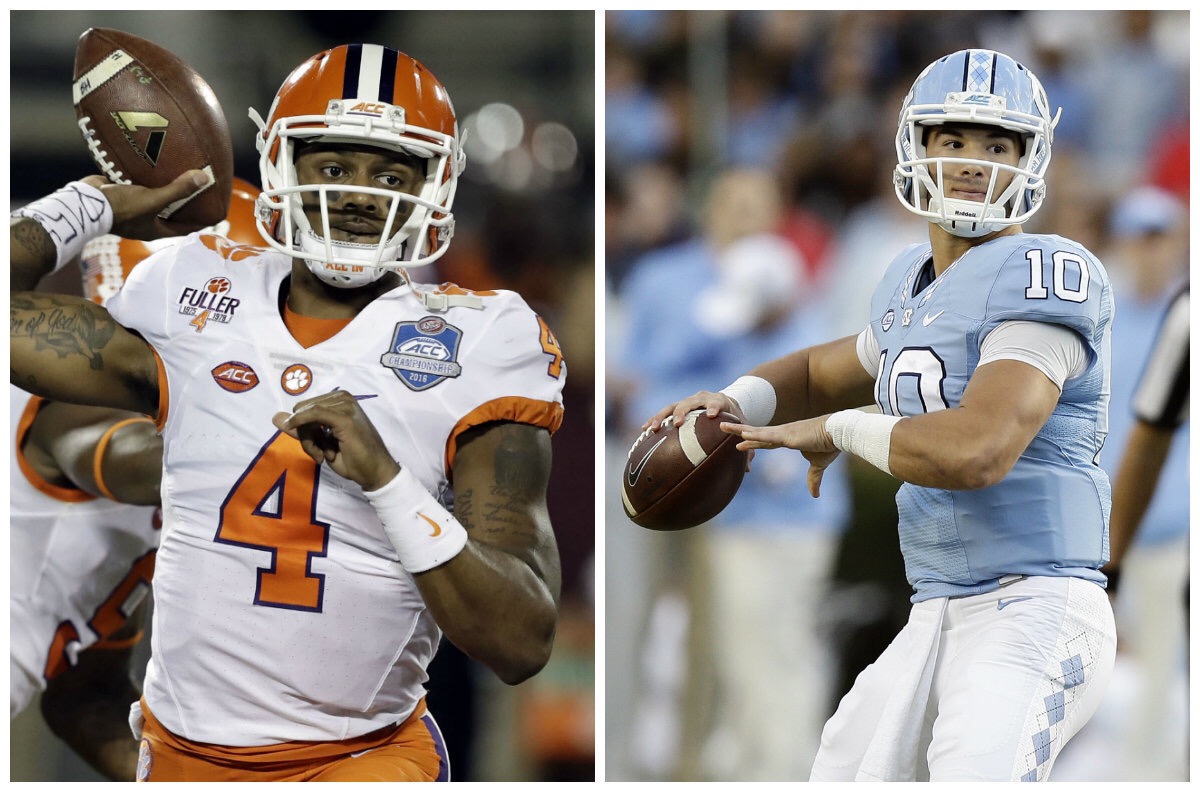 The quarterback class in the 2017 draft is a decent class but as it stands, there does not appear to be a franchise signal caller in the group. Despite that, as many three, maybe even four quarterbacks could go in the first round of this draft.

Here are my top twenty quarterbacks in this class.

1. Mitchell Trubisky, North Carolina, 6-2 222, NFL Comparison: Jimmy Garoppolo
Strengths
-Trubisky is a fluid athlete in the pocket. Rhythmic in his drop and  stands tall in the pocket. Gives his progression time and can reset his feet and hip and hit his second or third read.

-Moves well in the pocket. Can come off of his spot, adjust and locate the open receiver. Gets out of the front and back door and throws with accuracy on the run.

-Trubisky has a quick delivery. Gets the ball with some good RPM’s and can place the ball wherever he wants.

-Trubisky has plus arm strength. Throwing mechanics are good. He can make NFL caliber throws with consistency. Shows good accuracy and touch on the deep ball. Can stick the comeback route and lead a receiver on the post.

-High I.Q. Played in an uptempo spread offense with a lot of verbiage. Trubisky got a lot of freedom at the line of scrimmage to change plays and get out of calls.

Weaknesses
– Hasn’t played under center and needs work on his 3, 5 and 7 step drops.

-Played in a wide open offense that limited his reads and cut the field in half for him.

-Ball tends to float on him, especially in the three step game. Needs to show more zip and touch on hitch and slant routes.

-Has a tendency to air mail intermediate routes, especially dig and drag routes.

– Doesn’t identify pressure like he should. Delay blitzes get to him. He will need work on picking zone blitzes.

Final Thoughts: Trubisky has an NFL arm and can make any throw asked of him. He is athletic and plays the quarterback position with toughness. He has some flaws in his game and would probably benefit from sitting for a year but he is certainly talented enough to eventually develop into a solid starting quarterback.

2. DeShaun Watson, Clemson, 6-2 221, NFL Comparison: Alex Smith
Strengths
-Watson is a winner, plain and simple. He led Clemson to back to back national championship games during his three years as a full time starter.

-Watson has good pocket awareness and presence. He is smooth in his drop and can get in and out of the front door with ease. Shows good escapability when the rush is in his face. Can extend plays and effectively throw on the run.

-Plus arm strength. Shows good accuracy and touch on the post and deep out. Can stick the comeback route in a spot where only his receiver could catch it.

-Watson has a quick, compact delivery. Does a good job of protecting the ball in his carriage. Eyes are always down field.

-Athletic runner who can execute designed running plays, especially in the red zone. Good on read plays and RPO concepts.

Weaknesses
-Needs work mechanically. Especially on sideline passes. Some of his passes have a tendency to sail.

-Footwork can be off at times and that affects his throws, especially on timing routes.

-Played in a spread, no huddle offense which utilized some pro concepts but not enough that he made full field reads or audibled at the line.

-Watson turned the ball over more than you would like for a quarterback. He forces too many balls into tight coverage, shows poor anticipation on routes designed to beat man coverage and  his accuracy suffers when throwing on the run.

-Will need to learn to operate in a huddle and play from under center. It could Watson some time to get used to playing in a pro-style offenses, especially when it comes to full field reads.

Final Thoughts: Watson needs a lot of work mechanically. He must improve his footwork and decision making and he must eliminate turnovers. The physical tools are in place for Watson to succeed as a dual threat quarterback but Watson will need developmental time.

3. DeShone Kizer, Notre Dame, 6-4 233, NFL Comparison: Cam Newton
Strengths
-Kizer has a big time arm and is capable of making every throw in the playbook.

-Athletic in the pocket. Kizer keeps his eyes down field, stays in constant motion and can locate the open receiver in his progression and deliver the ball on time.

-Has a fluid, tight over the top delivery. He can fit three step routes into tight spots and shows an ability to add and subtract off of different throws.

-Shows good accuracy on his deep ball, especially on post and fade throws.

Weaknesses
-Locks onto his primary reads too long and takes a lot of sacks. Limited pocket awareness when getting immediate inside pressure.

-Sails too many balls inside the hashes. Needs to show more accuracy on Dig and Post routes.

-Forces the ball into double coverage. Needs to do a better job of picking up the safety over the top in his reads.

-Careless with the ball. Kizer had at least one pick in 15 of his 23 career starts. That is not a good ratio.

Final Thoughts: Kizer is talented but he would have benefited from staying in school another year. He has too many flaws in his game and will need to sit one to two years before he is ready to start in the NFL. He has my third ranked quarterback strictly on physical tools.

4. Patrick Mahomes, Texas Tech, 6-2 225, NFL Comparison: Russell Wilson
Strengths
-Mahomes has elite NFL arm strength. Can make every throw in the book and can zip the ball into high traffic areas with accuracy and touch.

-When he sets up in the pocket and allowed to process the defense, Mahomes is sound fundamentally. He transfer his weight well on his delivery and can throw from a variety of platforms.

-Played in a spread offense that gave him a lot of free to get in and out of play calls at line of scrimmage. Adept at reading defenses and executing RPO’s.

-Effective on play-action fakes. Does a good job of selling the run, setting up high off the fake and getting his eyes down the field.

Weaknesses
-Mahomes has exclusively played in the spread. Needs to learn to play from under center. Taking a snap could be a process for him early on just like it was with Jared Goff.

-Improvises way too much. He doesn’t play within the system. Has a gunslinger mentality. Reminds me a great deal of Brett Favre in terms of how he plays the game. Takes way too many chances, especially outside the pocket.

-Limited experience with reading coverage. Many of his reads in Texas Tech’s offense were first level reads because of the RPO based offense he played in.

-Too much of an upper body thrower. He needs to learn to use his whole body when throwing the football.

-Turns the ball over way too much. Again, it is his approach to the game that hurts him in this area.

-Patient in the pocket. Kaaya will hang, go through his progression and hitch up and deliver.

-Moves well in and out of the pocket and shows good anticipation on timing routes.

-Can add and subtract from all throws despite not having elite arm strength. Understands that he has to throw the ball from different platforms and use different arm angles.

-Smooth and fluid in drop. Ball carriage is good and he has a quick release.

Weaknesses
-Average arm strength. He will struggle at times to make has to has throws. Struggles to fit the ball into tight spots in the three step passing game and on comeback routes.

-Plays robotic. Focuses too much on fundamentals in game and it affects his performance.

Final Thoughts: Kaaya has NFL starter capability but he needs to put on weight and improve his arm strength. He would benefit greatly from playing in a West Coast offense because of his ability to throw timing routes and stay in the pocket. Lacks the mobility and vertical arm strength to play in a spread offense.

6. Davis Webb, Cal, 6-5 230, NFL Comparison: Brock Osweiler
Webb has good size and plus arm strength. He is willing to hang in the pocket, work his progression and deliver the ball on time. Webb can make every throw in the book and does enough to expand the pocket and throw receivers open. Willing to hang and take a hit in the pocket. Stares down blitzes. Stiff in the pocket. Ball carriage is high and awkward. Needs mechanical work. Delivery can be long at times. Could go in the first round but will more than likely go in the second round.

7. Nate Peterman, PITT, 6-2 226, NFL Comparison: Kirk Cousins
A pure pocket passer who is willing to hang, hitch and deliver the football. Has big hands for a quarterback his size so he can handle the ball on play-action plays with ease. Can make every throw in the playbook and does a good job of identifying coverage and attacking it, especially zone coverage. Throws well on the run. Shows good anticipation and throws receivers open. Accuracy is questionable. Peterman sails a lot of throws. Needs to do a better job of fitting the ball in on timing routes. Peterman has the potential to eventually develop into a starting quarterback.

8. Josh Dobbs, Tennessee, 6-3 216, NFL Comparison: Trevor Siemien
Dobbs has an NFL arm and brain. Highly intelligent quarterback who will pick an NFL offense no problem. He was an aerospace engineer major at Tennessee. Athletic. Can make plays in and out of the pocket. Dobbs can be used on designed running plays, especially in the red zone. Can throw the deep ball with consistency but has accuracy issues. He doesn’t show good timing or anticipation on routes outside the hashes. Decision making is questionable. Ideally suited to be a developmental quarterback.

9. Alek Torgersen, Penn, 6-2 218, NFL Comparison: Cody Kessler
Torgersen played in a spread offense at Penn, He processes information quickly and has a quick release. He can get the ball out on time and can throw from different arm angles. Torgersen is athletic enough to extend plays out of the pocket. Has average arm strength but can make throws down the field on a consistent basis. Shows good touch on vertical routes. Playing in the Ivy League could hurt Torgersen because of the level of competition. Day three prospect.

10. Chad Kelly, Ole Miss, 6-2 228, NFL Comparison: Jay Cutler
Kelly has one of the best arms in this class. He can make all the throws and he has experience playing in a spread offense that allowed him to audible and make full field reads in his progression. Willing to let it rip and can fit the ball into tight spaces. Athletic. Can be used on designed running plays and he can make plays when things break down.  Has major character issues and lacks the maturity to step and play right away. If Kelly is given time, he could develop into a good back up quarterback or maybe even a starting quarterback.