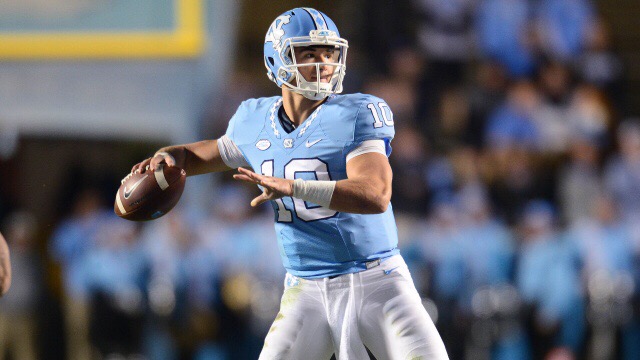 2. San Francisco 49ers: Solomon Thomas, DE, Stanford: The Niners would like to trade down. If they can’t, they’ll go local with Thomas.

3. Chicago Bears: Mitchell Trubisky, QB, North Carolina: The Bears want to a develop a quarterback of the future. Trubisky is that guy.

4. Jacksonville Jaguars: Leonard Fournette, RB, LSU: Fournette is the workhorse running back Tom Coughlin and Doug Marrone want to be the centerpiece of the Jags offense.

5. Tennessee Titans: Jamal Adams, FS, LSU: Adams at five would be a steal for a Titans team that is revamping it’s secondary.

7. Los Angeles Chargers: Malik Hooker, FS, Ohio State: Medicals aside, Hooker is as talented as any player in this draft.

9. Cincinnati Bengals: Jonathan Allen, DT, Alabama: Allen will slip slightly but he won’t get past the Bengals at this pick.

10. Buffalo Bills: Mike Williams, WR, Clemson: The Bills need to find a receiver that can play with Sammy Watkins and eventually replace him. Williams is the guy.

11. New Orleans Saints: Derek Barnett, DE, Tennessee: The Saints have to resist the urge of taking O.J Howard and take the pass rusher in Barnett.

12. Cleveland Browns: Deshaun Watson, QB, Clemson: The Browns will eventually get their quarterback and it’s the one Hue Jackson wants.

14. Philadelphia Eagles: Corey Davis, WR, Western Michigan: There is growing sentiment that the Eagles are going to trade Jordan Matthews. If that is the case, Davis is the pick here.

15. Indianapolis Colts: Reuben Foster, ILB, Alabama: Foster failed a drug test at combine. He will slip but he is not slipping past the Colts at this spot.

16. Baltimore Ravens: John Ross, WR, Washington: Ross’ injury history is quickly becoming a topic around the league but it won’t be enough to deter the Ravens from drafting him.

17. Washington Redskims: Haason Reddick, OLB, Temple: The versatile Reddick will be a terrific fit in the Redskins 3-4 defense.

18. Tennessee Titans: Tak McKinley, OLB, UCLA: The Titans added a difference maker in their secondary with their first pick in Jamal Adams. They grab a pass rusher here with McKinley.

19. Tampa Bay Bucs: Garrett Bolles, OT, Utah: The Bucs need a left tackle to protect Jameis Winston’s blindside and they get that tackle in Bolles.

20. Denver Broncos: Forrest Lamp, OG, Western Kentucky: The Broncos need a tackle more than a guard but Lamp will be the best available lineman left on the board.

21. Detroit Lions: Taco Charlton, DE, Michigan: Bob the Builder believes in building from the inside, out. The Lions need a complement to Ziggy Ansah and Charlton makes sense.

22. Miami Dolphins: Jabril Peppers, S, Michigan: Peppers is a versatile safety that can play in all packages and make a difference. The Dolphins need that type of player in their secondary.

23. New York Giants: Dalvin Cook, RB, Florida State: I can’t see a talent like Cook slipping out of the first round. The Giants won’t pass up on him.

26. Seattle Seahawks: Kevin King, CB, Washington: King is an effective press corner with length. He would be an ideal fit in the Seahawks defense because of his ability to play in Cover 2 or Cover 3.

27. Kansas City Chiefs: Patrick Mahomes, QB, Texas Tech: Mahomes would be a great fit in Andy Reid’s offense because of his arm strength and mobility.

28. Dallas Cowboys: TreDavious White, CB, LSU: White fits the mold in terms of what the Cowboys look for in cornerbacks. He can play on the line or in the slot.

29. Green Bay Packers: Marlon Humphrey, CB, Alabama: Humphrey gives the Packers some much needed size and toughness on the outside. He will challenge receivers underneath and compete in jump ball situations in the red zone. Two things Packers corners didn’t do last season.

30. Pittsburgh Steelers: T.J Watt, OLB, Wisconsin: The Steelers need to bolster their pass rush. The younger Watt would be an upgrade over Jarvis Jones.

31. Atlanta Falcons: David Njoku, TE, Miami (Fla): If Njoku falls to the Falcons, they would be foolish not to take him here. He would give Matt Ryan yet another weapon that can work the middle of the field.

32. New Orleans Saints: Quincy Wilson, CB, Florida: Wilson has the length and the ball skills the Saints are looking for as they try to revamp a porous defense.