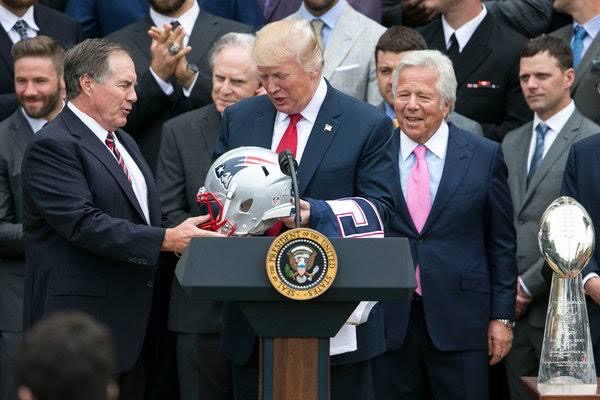 The Patriots have been on the news a lot the past couple of days. Here my thoughts on four of the biggest stories concerning the team.

1st Down: Aaron Hernandez Commits Suicide: Look, I am not going to get on my high horse and lecture you on why Hernandez is a scumbag and how I have no sympathy for him and his family. People can formulate their own thoughts and opinions on who he was and his life.

The only thing I will say is this. Hernandez’s life was tragic. He never got over the death of his father in 2006 and he turned to crime to let out his frustration. He was a thug plain and simple.
There are so many unanswered questions that will never be answered now. The irony in all of this. Now that Hernandez is dead, by law he is a free man. He is free in more  ways than one.

2nd Down: The Patriots Visit the White House: 34 players, coaches, team officials and Owner Bob Kraft attended today’s Super Bowl ceremony on the South lawn.
Some questioned whether or not the Patriots should attend the ceremony in light of what happened this morning with Aaron Hernandez. That is nonsense! Of course they should attend. What happened with Hernandez should have no bearing on today’s ceremony. He hasn’t been a member of the organization since 2012. The Patriots have distanced themselves from him. Why cancel the ceremony because he passed away? It really makes no sense.
FYI. Other than Tom Brady, all of the other players should have attended today’s ceremony. He has a legit reason with his mother ill and in Boston.

The other players have every right to skip the ceremony but skipping it simply because they don’t agree with Trump politically is foolish. Like him or not, he’s the President of the United States. Show some respect.

3rd Down: Butler Signs RFA Tender. Now What? Malcolm Butler signed his $3.91 million dollar tender yesterday. That means he is on the roster and a member of the team. It will be interesting to see how long he stays on the roster.
I can still see the Patriots trading him next week if the right offer comes along. The Butler saga is far from over.

4th Down: James White Signs a Three Year Extension: White signed a three year, $12 million dollar extension with $4.69 million of it guaranteed.
A year ago we were wondering if he was going to be the odd man out in the running back rotation but thanks to a good regular season and a terrific Super Bowl performance, White was extended by the Patriots.
White fits what the Patriots like doing with their running backs offensively. He is versatile and a threat out of the backfield. The Patriots didn’t want to risk losing White like they did Shane Vereen.
Image courtesy of Al Drago/New York Timed