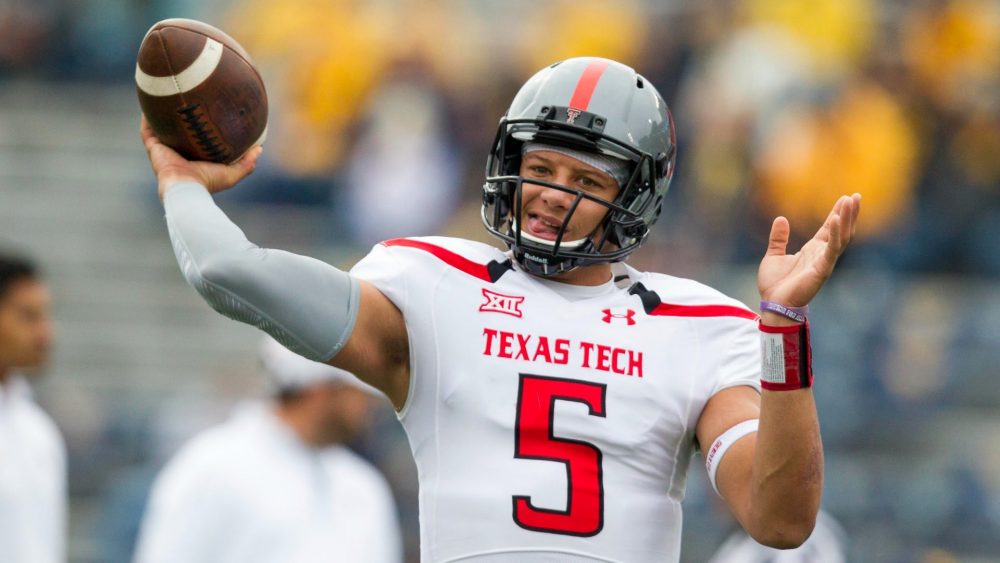 I am not 100% sold on Patrick Mahomes. Spread quarterbacks are a scary lot at the next level.

1.One has to assume that with the Patriots re-signing Brandon Bolden means that LeGarrette Blount is officially out of the picture. How many running backs can you carry? Seriously.

2. Texas Tech quarterback Patrick Mahomes is the apple of many eyes around the NFL but I still don’t buy him as a starting NFL quarterback. I know the arm strength is there but spread quarterbacks scare me, especially in the first round.

3. Christian McCaffery is now being touted as a top ten pick. My response. Nah. I like him in the 15-25 range. Top ten is too rich for my blood.

4. Speaking of top ten picks. LSU safety Jamal Adams and running back Leonard Fournette secured their spots in the top five yesterday with impressive pro day performances. Fournette was especially impressive. He is down twelve pounds from the combine. He weighed 240 pounds in Indy and checked in at 228 pounds yesterday. According to several scouts that were there, he looked svelte and smooth in drills. Adams also impressed trimming his forty time from 4.56 at the combine to 4.41 yesterday.

5. I don’t believe for one second that Tony Romo is “officially” retired. If the right offer were to come along, he would ditch the CBS blazer for the shoulder pads.

6. Bill Belichick was reportedly subpoenaed in the Aaron Hernandez trail but did not show up to court. Normally that would be a big deal to a judge but seeing that Hernandez’s defense team rested their case yesterday, Belichick should be out of the cross hairs of the law. For now anyways.

7. Are Saints GM Mickey Loomis and coach Sean Payton bad people for meeting with embattled Oklahoma running back Joe Mixon yesterday? I don’t think they are but there are people who will question their integrity. That is flat out dumb in my opinion!

8. Tennessee running back Alvin Kamara has visits set up with the Vikings and Panthers. Kamara had an impressive pro day last week and has become a viable option for teams late in the first round and early in the second round. Several scouts have compared him to Jamaal Charles. Kamara is not as fast but he might be more well rounded than Charles was coming out of Texas.

9. Tom Brady and Rob Gronkowski have supposedly been helping former Patriots tight ends coach Brian Daboll install the Patriots offense at Alabama. Brady has also been “mentoring” Alabama quarterback Jalen Hurts on the offense. Talk about unfair! As if Alabama didn’t already have several built in advantages. Add direct pipeline to the Patriots as another one.