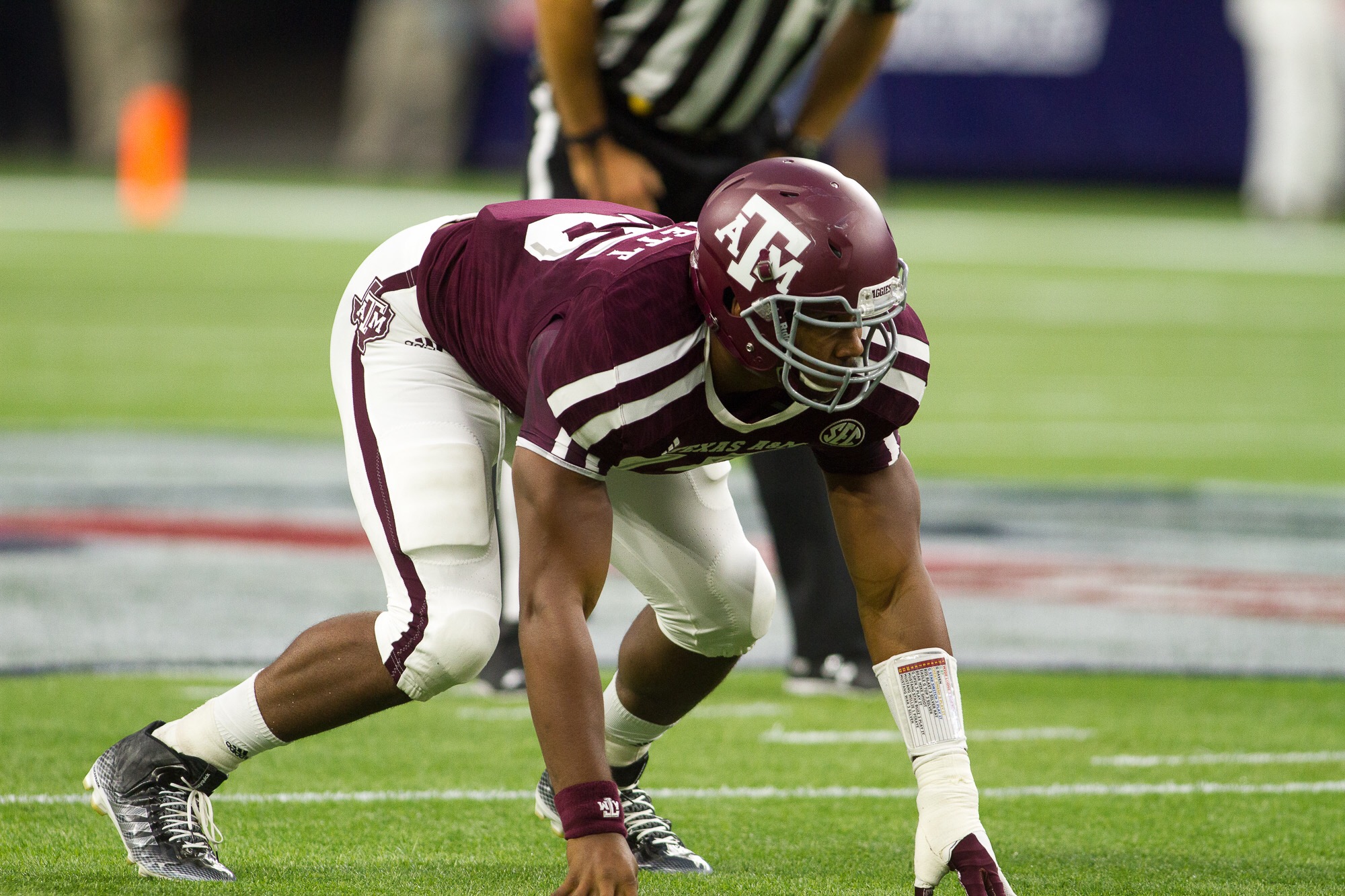 The defensive end class is headlined by Texas A&M’s Myles Garrett. Garrett is a freak athlete in the same mold as Julius Peppers. Garrett will more than likely go first overall to the Cleveland Browns. The rest of this class has top end talent but is not deep.

-Garrett is an explosive short area athlete is explosive off the snap and can gain ground quickly.

-Garrett is a natural bender who plays with good body lean. He has strong hands and can extend and disengage on contact consistently.

-A finisher in the open field. Whether he’s pursuing the quarterback or other ball carrier, Garrett has elite quickness and uses his long strides to his advantage.

– Garrett primarily wins with speed as a pass rusher but he is strong enough to bull and rip through an offensive tackle. He has the ability to get in and out of his pass rush moves.

– Disruptive on T-E stunts. Garrett gets inside position and slant and angle moves and disrupts blocking schemes.

– Garrett can be undisciplined at times and play outside the scheme.

-Not naturally instinctive. Relies too much on his ability at times.

– Capable of fitting and anchoring versus the run but Garrett doesn’t do it consistently enough.

– Struggles to disengage against zone blocking schemes. Tends to widen too much and gets taken out of the play.

Final Thought: Garrett is the best player in this draft and a no brainer for the Browns with the first pick. Cleveland needs good players to ignite their turnaround. Garrett would be a good building block.

-Uses his hands and feet well as a pass rusher. Has quick hands and is effective in swim and rip moves as well as counters off of those moves.

-Can play inside as a 3 tech or outside in sub packages as a 5 tech.

-A high motor player who makes plays on effort. Quick off the snap. Can be disruptive and blow up gaps in a shade technique.

-Has enough lower body strength to anchor down and hold the point versus the run.

Weaknesses
-A good not great athlete. Overachieves at times because of his effort.

-Short armed. Struggles against bigger offensive tackles that can get inside hand placement on him.

-Has a tendency of playing high and he loses leverage on contact. For a “short” guy he plays too high.

-A tweener who may struggle to find a defined position. The lack of length could hurt him at defensive end, especially against the run.

Final Thoughts: I like Thomas as a football player but I am not as high on him as other members are in the draft community. I don’t think he is a top five pick but in the end he will be off the board no later than five.

3. Taco Charlton, Michigan, 6-6 277, NFL Comparison: Mario Williams
Strengths
-Charlton is long and athletic. He has a good blend of power and speed.

-Quick off the snap and has high end reaction skills. Can plant, re-direct and locate the ball carrier along the line of scrimmage.

-Plays with good lean and bend and has the ability to transition into secondary moves as a pass rusher.

-Stout enough that he can anchor and hold the point against the run.

-Explosive pass rusher who does a great job of attacking half the man with a stab and rip move. He wins with speed and power as a pass rusher.

Weaknesses
-Inconsistent. Should have been more productive than he was at Michigan.

-Tends to come out of his stance high and doesn’t consistently bend at the hips and knees. Tight hipped at times.

– Limited in terms of position versatility. Can only play the 9 or 5 technique defensive end spots.

-Not very instinctive. Prone to being trapped and kicked out by power running teams. You game plan your running game at players like Charlton.

Final Thoughts: Charlton is a very good player and he should go in the first round. The production wasn’t there in college so he needs to be more consistent.

4. Charles Harris, Missouri, 6-3 253, NFL Comparison: Connor Barwin
Strengths
-Undersized, explosive defensive end who gets out of his stance and can close on ball carriers quickly.

-Fluid in his movements. Harris can play all along the defensive line and close and finish.

-A speed rusher who has quick hands and can counter back inside on double moves. He can translate his speed to power with ease.

– Well built. Has a big lower half which enables him to anchor versus the run. Has the ability to extend and get off on sideline running plays.

-High motor guy who can play all three downs in any scheme and give max effort.

Weaknesses
– Size is a bit of a concern. Can only really play the 5 technique defensive end/outside linebacker. Harris does not offer versatility.

-Struggles with long armed tackles that can reach him and seal him. He struggles to get off blocks on the perimeter at times.

-Loses the ball on misdirection and counter plays. He needs to take better angles when pursuing from the backside.

-Isn’t physical. He tends to olay run blocks when the ball is away from him. Ankle grabber when it comes to tackling.

-There were some attitude questions at Mizzou after Gary Pinkel retired. Has a ME side to him according to some scouts.

Final Thoughts: What you see is what you get with Harris. He is a high motor player who can make plays in the backfield and be disruptive but he can also struggle to shed blocks against the run. Harris offers very little scheme versatility so which ever team drafts him, has to exclusively use him as a 5 technique defensive end or outside linebacker.

– Explosive off the snap. Can gain ground quickly and penetrate into the backfield. Plays with decent bend and has the ability to unlock his hips and get going forward.

-Limited as a pass rusher but he understands the concept using your initial move to set up a double move. Primarily a bull, stab and slap pass rusher.

-Has the overall body strength to drop his hips at the point of attack and anchor down against the run game. Can extend and shed reach blocks and scoop blocks.

-Has some value on special teams as a kick blocker.

-Tight hipped. He isn’t fluid in his movements and can’t unlock his hips to accelerate forward sometimes.

-Doesn’t play with enough strength and he can’t control blockers on a consistent basis. Gives up his chest plate too easily and gets driven off the ball.

-Below average instincts. He needs to learn to play the game at a higher level.

Final Thoughts: Kpassagnon is a an intriguing prospect with a lot of upside but he will require time to develop. Which ever team drafts him, has to be patient.

6. Jordan Willis, Kansas State, 6-3 255, NFL Comparison: DeMarcus Lawrence
Willis is a high motor player who has a quick first step and can close on an offensive tackle quickly. Plays with good lean and bend and can accelerate and finish at the quarterback. A physical, Willis and wrap, secure and finish at the point of contact. He needs to develop further as a pass rusher. He has a limited repertoire. Willis must learn to play with better knee and hip bend and he must consistent stack and shed blocks. He gets overwhelmed at the point against the run at times.

7. Carl Lawson, Auburn, 6-2 261, NFL Comparison: Dwight Freeney
Lawson is undersized but he has a motor. He has good get off at the line of scrimmage and plays with good lean and a low pad level. He needs to develop more as a pass rusher. he relies too much on his speed rush and his spin move. Can get overwhelmed at times against the run. Might be better suited in a 4-3 defense where he can rotate in as a situational pass rusher.

8. Dawuane Smoot, Illinois, 6-2 255, NFL Comparison: Jabaal Sheard
Smoot was highly productive last season at Illinois. He is a bit fit in the 4-3 as a 5 technique defensive end. Smoot has good first step quickness and can win with speed or power. He has strong hands and he can extend and separate once engaged. A natural bender, Smoot can run the arc and chase and finish plays from the backside. Smoot does struggle with bigger offensive tackles that can get hand placement on him. Lacks the lower body strength to consistently anchor against the run.

9. Trey Hendrickson, Florida Atlantic, 6-4 266, NFL Comparison: Paul Kruger
A highly motivated competitor who plays above his talent level. Henderickson has good first step quickness and plays with natural lean and bend. Can re-create the line of scrimmage and makes a ton of plays from the backside. Hendrickson has good hands and can get into his counter moves as a pass rushers. Wins primarily with a speed and swipe technique when rushing the passer. Shows functional strength to anchor against single blocks as a run defender but has a tendency to get upfield too much and take himself out of plays. Hendrickson has special teams value as well.

10. Carroll Phillips, Illinois, 6-3 242, NFL Comparison: Willie Young
Phillips is a pure speed rusher who is ideally suited as a 4-3 sub defensive end. He can play in a two or three point stance and be effective. Phillips covers a lot of ground on his first step and has quick hands. He wins hand fights routinely. He easily transitions from one pass rush move to another. Light against the run. Has a tendency to play high and lacks the lower body strength to consistently anchor when setting an edge. A high motor player who could also contribute on special teams.