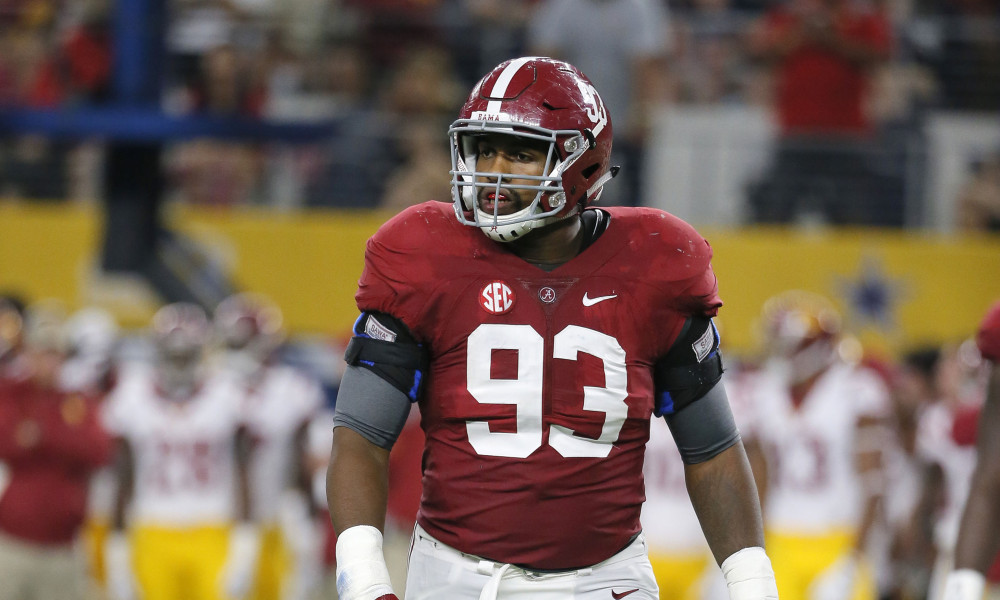 The defensive tackle class in this draft is highly underrated in my opinion. There is more talent in this group than people. While there might not be much first round value, there is definitely value at this position in day two and three of the this draft.

Here are my top 20 defensive tackles.

-Boasts excellent power and quickness. Shows good acceleration in his first step. He can plant, re-direct and play down the line of scrimmage.

-Has quick hands. Gets inside hand position and can press, rip and take a gap. Plays with good lean and bend.

-Allen has a strong lower body. He can absorb a double team and split it.

-Understands blocking schemes and can be disruptive when he diagnoses a play quickly.

-Allen plays with good balance and gets in and out of his stance with relative ease. He doesn’t waste movement.

Weaknesses
– Allen is a tweener. His versatility is great but if he is going to go in the top five, teams want a plug and play guy.

-Has short arms. If he doesn’t get inside hand position, he struggles to extend and disengage.

-Quick up the field but he is fast laterally. Struggles to track the ball and finish plays. Gets caught out of position at times and suspect to being trapped.

-Shoulder injury is a bit of a concern. Hampered him at the combine.

Final Thoughts: Allen has pro bowl potential but he needs to play in a one gap system that will allow him to penetrate and be disruptive. The lack of size could be a problem for him against the run. He needs to prove he can hold up inside.

-Brantley has an explosive first step and gains ground quickly.

-Gets inside hand placement and has enough upper body strength to extend and disengage.

– Moves well laterally and can chase and finish from the backside.

– Brantley can split a double team with speed and power. Plays with good pad leverage.

– A three down player who can line up wide in a 30 front and rush the passer in sub packages.

Weaknesses
– Brantley takes himself out of a lot of plays. Needs to play under control more.

– Gets turned a lot on single blocks and loses his gap way too often.

– Gets upfield too much and is vulnerable to being trapped and kicked out.

-Needs to do a better job of holding his ground versus double teams. Can’t play head up. Needs to be in a shade technique.

Final Thoughts: Brantley was highly productive at Florida. He has the potential to be a pro bowl caliber player. Brantley should step in and make an immediate impact as a rookie.

-Adams has a long arms and big hands. He can extend, stick and disengage.

-Active for his size. Moves well in all four directions.

-Explosive one gap player who can clear gaps, accelerate and finish at the ball carrier.

-Bull and rip pass rusher who plays with good lean. Has enough twitch to bend and redirect.

– Ultimate hot and cold player. Adams is frustrating. He doesn’t always play up to his potential.

– Take plays off. Has had conditioning issues in the past.

– Comes out of his stance high and struggles to disengage once an offensive lineman locks on.

– Short stepper who doesn’t cover a lot of ground as a pass rusher.

Final Thoughts: Adams had a disappointing junior season and looked uninspired at times. If he can put it together on a consistent basis, Adams can be a starter. If not, he will be what he has been thus far. Inconsistent.

– McDowell has long arms and strong hands. Gets inside hand placement on a consistent basis.

– Moves well laterally and can take a gap. Effective on twists and stunts.

– Can play down the line and has the closing ability to get to the quarterback and finish.

– Scheme versatility. Can play defensive tackle in a 40 front and defensive end in a 30 front.

– Uses his hands well as a pass rusher. Can club and swim effectively. Strong bull rusher who sets offensive lineman back.

– McDowell is fundamentally flawed in some areas. His stance is too narrow and he has heavy feet.

– Doesn’t play with enough lean or bend. Comes out of his stance too tall.

– Struggles to get off blocks. Doesn’t split double teams on a consistent basis when he plays inside.

– Inconsistent. Loaded with talent but doesn’t consistently play up to his potential.

Final Thoughts: McDowell is a first round talent but consistency issues have dogged him throughout his college career. McDowell must put it all together moving forward.

-Ideally suited to play the 3 technique in the 4-3.

-Explosive off the snap. Can penetrate, plant and play down the line of scrimmage.

-Strong on contact. Watkins can punch and set an offensive lineman back.

-Displays good closing speed from the back side of plays.

-Has enough length and explosiveness to kick outside and play the 5 technique in a 30 front.

-Watkins struggles to split double teams. He has a tendency to come out of his stance high.

-Struggles to press and disengage off of blocks. Gets caught up at times and loses leverage.

-Limited as a pass rusher. Needs to win with speed. Not strong enough to consistently bull and rip past blockers.

-Stamina could be an issue. Runs out of gas. Better suited as first down rotation player.

-Inconsistent at times. Doesn’t always show up in big games.

Final Thoughts: Watkins has the potential to be a starter but he must get in better shape and improve his stamina otherwise he will be a rotation tackle.

6. Dalvin Tomlinson, Alabama. 6-3 310, NFL Comparison: Dan Williams
Tomlinson is ideally suited to play the 3 technique in the 4-3. he has strong hands and can punch and disengage from blockers. Plays with a low pad level and good lean. Tomlinson is naturally instinctive. Gets upfield too much and has a tendency to take himself out of plays.

7. Jarron Jones, Notre Dame, 6-6 316, NFL Comparison: Stephon Tuitt
Very similar to former Notre Dame defensive tackle Stephon Tuitt in terms of his game. Has long arms and does a good job of extending and shedding. Plays with good lean and has shown the ability to get into a secondary move when rushing the passer. Jones needs to play lower. plays high and gets pinned by double teams.

8. Elijah Qualls, Washington, 6-1 313, NFL Comparison: Corey Liuget
Qualls is your prototypical 4-3 shade or 2i defensive tackle. Quick off the ball. He can re-create the line of scrimmage and plant and change direction. He is a good tackler because he plays with a low pad level. Qualls can get overwhelemed at times by bigger, phone booth type guards once they get their hands on him.

9. Larry Ogunjobi, UNC Charlotte, 6-3 305, NFL Comparison: Sheldon Rankins
Ogunjobi has been terrific in the pre-draft process. He has really elevated his stock. He is explosive off the snap and has strong hands. He can consistently get inside hand position. Plays with good lean and doesn’t waste motion. Ogunjobi has shown the ability to consistently acclerate and finish at the quarerback. Level of compeition is a concern. Teams need to see if Ogunjobi can play at a high level against elite comptition.

10. Chris Wormley, Michigan, 6-5 298, NFL Comparison: Quinton Dial
Wormley is not as big as Dial but he is more explosive and athletic on the snap of the ball. He does a good job of resetting the line of scrimmage and he can wreck run blocking schemes. Wormley has a high motor and can play all along the line of scrimmage. He has a tendency to come out of his stance high and gets washed down by double teams.