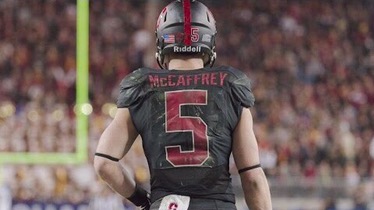 If I was an NFL GM I would be crossing the name Christian McCaffrey off my draft board. McCaffrey announced that he is bailing on his Stanford team and will not be playing in the Sun Bowl against North Carolina. LSU’s running back Leonard Fournette is also sitting out his bowl game but he has been dealing with an ankle injury all year so at least he has a somewhat legit injury concern. Not McCaffrey, who is as healthy as the proverbial horse. Nope, the Stanford running back will be a healthy scratch when he prematurely taps out on the 2016 season.

Of course McCaffrey backers will say the legit threat of an injury is a perfectly valid reason to not play. McCaffrey is big-time talent and is a virtual lock to be drafted in the first round of the 2017 NFL draft. If he is hurt and slides in the draft, it could cost him millions. He has officially stated that his decision is driven by his desire to begin “preparing” for the NFL draft, but that is just a euphemism for “I want to avoid any possibility of an injury.” Of course that is an understandable fear but it’s also a selfish one. Although we understand McCaffrey’s ambitions to be at his best on draft day, that pursuit does nothing to help the vast number of teammates, coaches and support staff that have worked tirelessly to get the 16th ranked Cardinals in position to play in a bowl game. Yes, there is a responsibility to protect your future but there is also an obligation to the school that provided you with a first class education and gave you the opportunity to excel on the football field.

And just how big is the risk really? McCaffrey has missed virtually no time in his three year Stanford career due to injury and despite the violent nature of football it is almost unheard of for a college player to suffer a so-called career ending injury. The more likely possibility is that he could suffer a major knee injury and miss some real time, but in this age of ever advancing modern medicine that is no longer the sports death sentence it was 40 years ago. Willis McGahee suffered as ugly a knee injury as you will see during his final bowl game yet was still drafted in the first round and went on to have a successful 10-year NFL career. In the rare case that McCaffrey suffers his own major injury you can bet, like McGahee, there will still be a big fat NFL contract offered to him by some running back starved team. Not to mention the multi-million dollar payout from his insurance policy. Is there some level of risk? Sure, but it’s not like a torn ACL is suddenly going to land Christian McCaffrey in the poor house.

I can’t help but think this entire decision is being driven by the horrific knee injury suffered by Notre dame linebacker Jaylon Smith in last year’s Fiesta Bowl. While it is true this might cost Smith his playing career, injuries like his are as rare as a Cleveland Browns win streak. Yes, it was a bad break for a wildly talented player but life is an imperfect ride, and one you can’t live in a constant state of fear. If a friend tells you he has a once-in-a-lifetime job interview, you don’t tell him to stay home on the off chance that he might get hit by a bus. You accept the risks life throws at you and plow on. It’s worth mentioning that Jaylon Smith, despite his great misfortune, still was drafted 34th overall and received a guaranteed $4.5 million.

And injury isn’t the only thing that can lower your draft stock. Try explaining to Bill Belichick at the NFL combine why you thought it was important to quit on your team. Stuff like that doesn’t go over too well with NFL front offices. Don’t be surprised if a few of them decide to pass on McCaffrey’s me-first attitude or conclude that he just doesn’t have that compete factor that you typically look for in a high draft pick. What happens when he faces impending free agency some day? Does he not fight through that shoulder injury week 17 because he is to concerned with his bottom line. And before you accuse me of overreacting read this great piece written by former NFL GM Jeff Diamond who lays out a compelling case for the potential draft hit to McCaffrey (and Fournette) for their decisions. His advice: any opportunity you get to compete and showcase your talent, you take it.

Perhaps the only thing more disappointing than McCaffrey’s decision has been the reaction of his team. His teammate Trenton Irwin tweeted: “The whole team supports McCaffrey in anything and everything.” This was followed by Stanford coach David Shaw who praised McCaffrey as a teammate and said, “We wish him great success at the next level, as we continue our preparation for the Sun Bowl.” Am I living in some kind of alternate universe? I know they have a relationship with the guy but how could they be that OK with this? No frustration? No disappointment? There was a time, not long ago, when something like this wasn’t even an option. But now that somebody has made the decision to cross that line why are so many people instantly accepting?

I also keep hearing some variation of, “If his team was in the playoffs then you know he would play…” Really? How do we know that? If you truly are thinking of your future and the millions that the NFL intends to shower upon you then why would you play in any game? And if he would play in a playoff game that sets a very troubling and strange precedent. Players might suddenly feel free to pick and choose which games they participate in based on importance. Does that mean if an NFL prospects team loses two early games, effectively eliminating itself from playoff contention, then will they consider sitting out the second half of the regular season? Just how far will players take this? I wonder if McCaffrey’s teammates would have felt differently if he hung up his cleats in mid-October to “prepare” for the draft.

It all just seems wrong. Players have an obligation to the schools that have been providing them with a six-figure education, to play out the set. They have an obligation to their teammates who have been working just as hard as them to bring the team to that point. They have an obligation to their coaches, whose jobs often are directly linked to wins and losses in big games. Make no mistake this is a big game. Yeah, it’s not the playoffs or even the Rose Bowl but it’s also not a matchup of two 6-6 teams in the Weed Wacker Poinsettia Ram-a-lam-a-ding-dong Bowl. Stanford is a ranked team playing in the Sun Bowl, a bowl with 80 years of tradition behind it. It’s the type of game that affects recruiting and could help establish a foundation for a program’s future. In other words, it’s not a game you sit out.

Then again no game is. Maybe I sound too old school or rigid but if a game is scheduled and your team is lining up to play – then you play every time. You don’t agonize over the future, you don’t contemplate the what-ifs, you don’t crawl behind a glass encasement with a sign on it that reads, “Don’t break until after draft.” You just play. You do what every player has done for over a century of college football, you lace up your cleats and let the chips fall where they may. And if you don’t trust my advice, as someone that has never had to play in a bowl game knowing they would be drafted by the NFL, then how about trusting the words of somebody that not only faced that choice, but who’s decision to play cost him dearly. When former Notre Dame linebacker Jaylon Smith recently contemplated his decision to play in last year’s Fiesta Bowl he simply said, “Honestly. With everything I’ve been through, if I could go back to January 1st, I’d play again.”

Now that’s a guy I’ll take on my team any day.