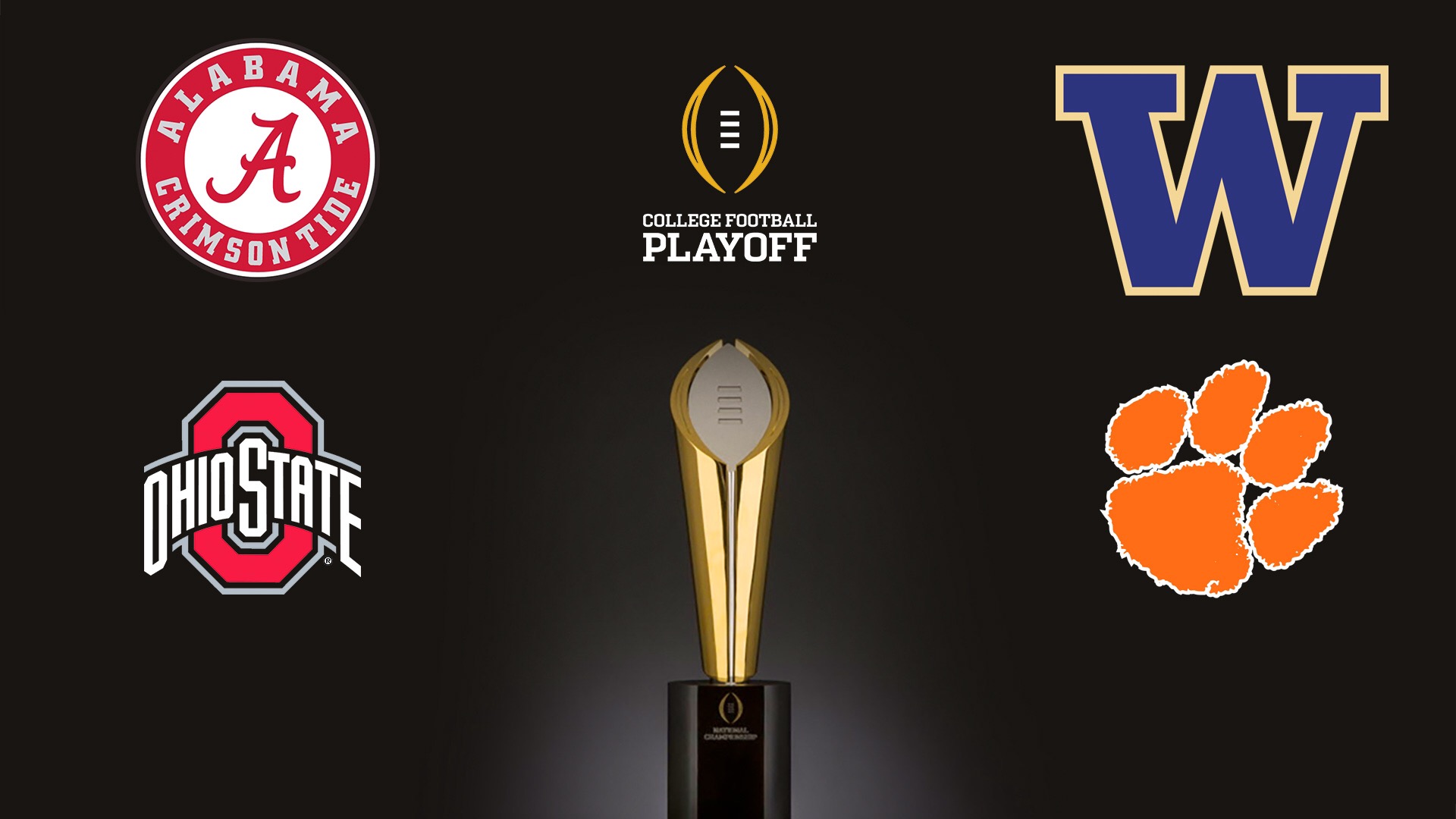 The day we have all be waiting for is finally here. The College Football Semifinals are upon us.

Here is our preview of both games.

Storyline: The Washington Huskies will look to shock the world this afternoon when they face the Alabama Crimson Tide in the first of two semifinal playoff games.

It won’t be easy. Alabama has won 26 straight games and they boast the nation’s number one defense. A defense which has scored 10 defensive touchdowns this season.

Here are three keys for each team in this game.

1. Washington Must Score First: The Huskies need to score on their first possession. They have to find a way to gain confidence early and put pressure on Alabama.

The Huskies need to get the ball out quick and neutralize the effectiveness of the Alabama front seven.

2. Hit the Gadgets: Washington will need to make big plays if they want to win this game.

Huskies coach Chris Petersen has a history of using gadgets, especially in bowl games. Washington will need to hit on a couple of trick plays if they want to win this game.

3. Front Seven Must Stop the Run: Alabama’s running game is multi faceted. The Tide can hurt a defense running the quarterback and the tailback.

Washington’s front seven must hold up and gap control the Alabama offensive line. If the Tide get their ground game going, Washington is in trouble.

1. Jalen Hurts Must Play Well: Jalen Hurts has played exceptionally well for a freshmen. The poise he has shown and his command of the offense is impressive.

Hurts will have to play well today. He cannot force passes if they are not there and he cannot try to win this game by himself.

2. Dominate the Line of Scimmage: Alabama is much better than Washington up front. They need to dominate the line of scrimmage on both sides of the ball.

If the Tide can establish their dominance up front, they will win this game running away.

3. Impose Your Will: Bama is better. If they play up to their potential, execute and impose their will on Washington, they will win this game and advance to the national championship game.

Prediction: Alabama 38 Washington 24: Washington will give Alabama all they can handle for a half but in the end, the Tide are too talented and too well coached. The Huskies will not be able to overcome that.

Storyline: The Clemson Tigers will look to make a return trip to the national championship game but it won’t be easy against an Ohio State team that is talented, well coached and looking to prove they belong here.

This game will feature a terrific quarterback match up between Clemson’s DeShaun Watson and Ohio State’s J.T Barrett. Both quarterbacks are the centerpiece of their respective offenses and the leaders of their teams.

The potential is there for a shootout between these two teams. Which ever quarterback has the ball last, could lead his team to victory.

Here are three keys for each team in this game.

1. Watson Must Take Care of the Ball: DeShaun Watson has thrown 15 interceptions this season. He has thrown 27 in the last two seasons. He is prone to turning the ball over.

Watson cannot take chances against an opportunistic secondary like Ohio State’s. He has to make good decisions in this game and take what the Buckeyes give him.

Look for Clemson to try and isolate Williams as much as possible, especially in the red zone. As good as Ohio State’s secondary is, they’ll struggle with Williams. He is a match up nightmare.

3. Contain J.T Barrett: Barrett is the one guy the Tigers must stop if they want to win this game. Sure, running backs Curtis Samuel and Mike Weber will also be factors in this game but if Clemson wants to win it, they must stop Barrett, especially on medium and short down running situations.

1. Get Consistent Pressure on Watson: The Buckeyes must force Watson into making a mistake. As we mentioned earlier, he is prone to turning the ball over.

Ohio State must get A gap Pressure and sugar rush with their ends so that Watson doesn’t break the pocket and extend plays.

2. Limit the Big Plays on the Back End: Ohio State’s secondary is the strength of their team but they’ll be challenged by this talented Clemson skill group.

It is imperative that cornerback Gareon Conley and free safety Malik Hooker identify Mike Williams in the formation and line up to his side. He is the one guy that can hurt Ohio State on the deep ball.

3. Get Curtis Samuel 20 Touches: Curtis Samuel is a weapon. Urban Meyer needs to get the talented junior twenty touches in this game.

Meyer must get Samuel the ball in the run game, screen game and in the pass game.

Samuel is Ohio State’s answer to Mike Williams. It is imperative that the Buckeyes put Samuel in a position to make big plays and impact this game.

Prediction: Ohio State 34 Clemson 31: I think this game will be a shootout that could go either way. I truly believe the quarterback with the ball in his hands last, could lead their team to a win.

There is something about J.T Barrett. I believe in him and his ability to will Ohio State to victory. I think he will make more plays than DeShaun Watson and that’ll be the difference in this game.