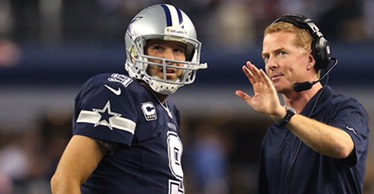 Jason Garrett needs to man up and start Tony Romo this week against the Eagles. It is the right move for the team.

Cowboys coach Jason Garrett needs to do man up and start Tony Romo on Sunday against the Philadelphia Eagles.

Starting Romo is the logical thing to do. This isn’t about soothing Romo’s ego or making him feel good about himself. It is about giving him game reps in the event that the Cowboys need him in the playoffs.

Romo is the back up quarterback. If something were to happen to Dak Prescott, the Cowboys need Romo to be ready to play. He hasn’t played a meaningful snap in a game since last Thanksgiving.

Starting Prescott is foolish and playing Mark Sanchez makes zero sense. Sanchez is the third string quarterback. He doesn’t need to play. He won’t be active in the playoffs.

The Cowboys need to have a back up plan in place. To simply say Romo will be ready if he is called is simply not enough. He needs reps. Ask the 2001 Patriots how valuable Drew Bledsoe ending up being in their run to a Super Bowl. Young quarterbacks get hurt. That’s why you need veterans like Romo. He is still an integral part of the team .

That is why Garrett should start him and play him the entire game. Romo needs to be ready to play and the Cowboys need to know that they can turn to him if they have to.

The bottom line is, Garrett needs to do right by his team and play Romo. He can’t worry about media scrutiny or what the owner thinks. He needs to man up and do the right thing.