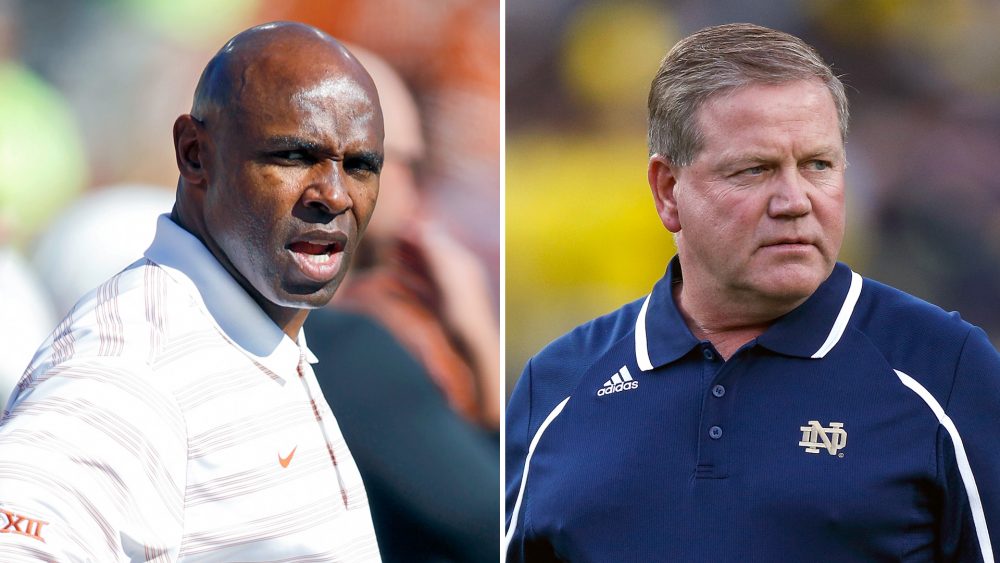 I am a little confused these days. I am trying to figure out how Texas coach Charlie Strong is on the hot season but Notre Dame coach Brian Kelly isn’t. After all, didn’t Texas beat Notre Dame to start the season?

You can’t tell me that expectations are higher at Notre Dame than they are at Texas because that is simply not true. The fans base and alumni at both schools expect their programs to be national title contenders.

Which is why I don’t understand how Charlie Strong could be on this scorching hot seat while Kelly gets a pass for the way Notre Dame has played thus far this season.

Both programs are below .500. Texas is 2-3 on the season while Notre Dame is 2-4. Both coaches have made changes at defensive coordinator. Both programs are essentially at the same place. So again, you tell me. How is Strong’s seat warmer than Kelly’s?

While the Irish have had some great moments in Kelly’s tenure, they are not consistently contending for a national championship. Isn’t that the expectation in South Bend? Its certainly not being 2-4.

Don’t get me wrong. I think Strong deserves his fair share of criticism for the performance of the Texas program and I don’t think its unreasonable to give a coach three years in Austin. Strong has everything he needs at his disposal to turn the Longhorns around. That being said, he hasn’t been there seven years. Kelly on the other hand is entering his seventh season at Notre Dame.

Both coaches need to turn things around and fast. I just think it would be fair if both coaches were held to the same standard. If for no other , Kelly has been at Notre Dame longer and has had more time to turn things around. However after seven seasons at the helm, the Irish are still perennial underachievers and that looks just as bad for Kelly as it looks for Strong at Texas.

Either way, both coaches are facing the prospect of being unemployed at seasons end unless their respective programs turn things around in a hurry.