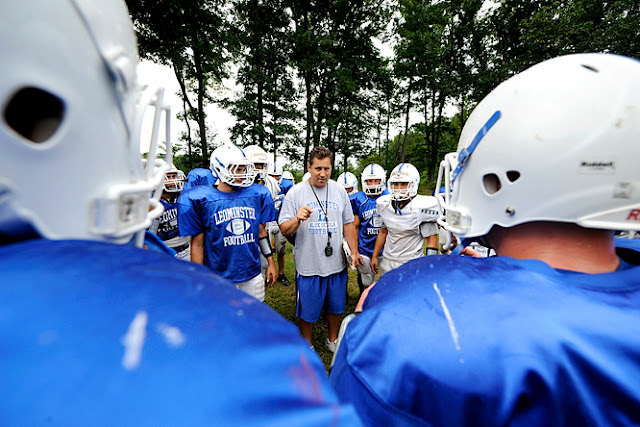 Leominister coach Dave Palazzi and his Blue Devils will try to slow down B.C High running back Danny Abraham tonight.

Week three is upon us and there are several key games this weekend across the Bay State. Here are my thoughts on some of the top games in the state.

1.Marshfield was suppose to be down after graduating one of the best classes in program history this spring. Thus far however, the Rams haven’t skipped a beat in wins over Cranston West (R.I) and Stoughton. They’ll have their hands full tonight however as they visit undefeated Falmouth.

2. People keep talking about how young St. John’s Prep is but they will give Everett all they can handle tomorrow when the two division powers collide. The Rockett Brothers (Wes and Hayden) and tight end Declan Burt headline a talented St. John’s roster that is good enough to beat the Tide if Everett doesn’t come to play.

3. Leominster will give B.C High fits tonight because they are well coached, multiple on offense and they play good D. That being said, B.C High running back Danny Abraham will be tough to stop.

4.  Stoughton, North Attleboro will be a classic Hockomock league dogfight. Which ever team wins this game will be in the drivers seat to win the Davenport division. Both will still need to beat Foxboro however at the end of the regular season to win the division outright.

5. Which Brockton team will show up tonight against Catholic Memorial ? The one that handled Fitchburg in week one or the one that needed overtime to beat Weymouth last week? C.M has been lurking in the weeds if you will. They need a signature win and they might get it tonight.

6. I hope the scoreboard at Haverhill can handle all of the scoring that is going to take place between the Hillies and the Grey Ghosts of Westford Academy tonight. We like to throw the term shootout around when it comes to football these days. This will be a shootout.

7. Its Sidwell Bowl I as the Franklin Panthers drive down 495 to take on the Taunton Tigers. This is the first time Brad Sidwell will face his former team. Sidwell was the head coach of the Panthers for 21 seasons so you know emotions will be running high. I have known Brad for a long time. He won’t say publicly how much this game means to him but trust me. It means a lot.

8. The top four teams in the Bay State League’s Herget division will duke it out this weekend. Milton travels to Walpole tonight and Natick plays at Wellesley tomorrow. Both games figure to be good and they’ll give us an early glimpse as to which one of these four teams is the top team in what appears to be a wide open division race.