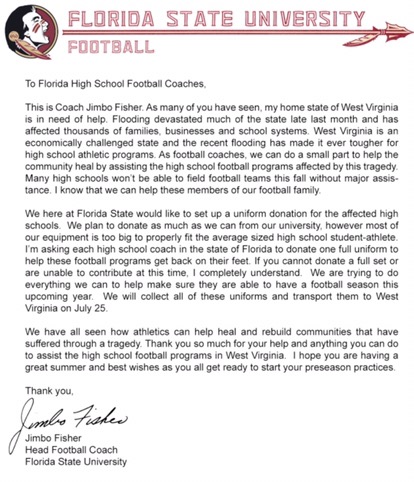 Kudos to West Virginia natives Nick Saban and Jimbo Fisher for rallying around a worthy cause in their home state of West Virginia.

The state was ravaged by floods last month that damaged buildings and schools. Some high schools have been damaged so badly, they may not reopen until later this year and may cancel their football seasons as result.

Other schools in the state have suffered significant damage but are still operational. Many of the equipment rooms in these schools have been flooded causing thousands of dollars in damage to equipment and uniforms.

No sport in this country brings people together like football. If native West Virginians like Nick Saban and Jimbo Fisher can do their part, we can all help. Donate what ever used equipment you might have in your program and let’s help the kids of West Virginia play football this season.